I guess I'm just a stubborn kind of fellow.... 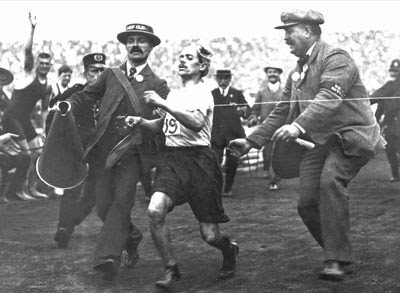 I used to hate running.  Bloody loathed it.  I know this sounds a little unlikely given that I've run 317 miles so far this year, but I really did.

They used to make us do it at school, you see.  At least once a week, we would be forced out onto a cross-country run of three or four miles, sometimes further.  There was a network of disused railway lines fairly close to the school, and there seemed to be a never-ending number of possible routes we could be forced to take, most of them involving clambering up a long, muddy hill.  It was hell.

It didn't help that I was hopeless at it.  I used to envy the people - and a kid called Nicholas Shaw was always the quickest - who could just go hell-for-leather and run around as fast as their legs could carry them.  I always seemed to have some kind of self-preservation mechanism that ensured I would always have something held in reserve.  I'd never run flat out because I was afraid of running out of gas.  Instead, I would run comfortably within myself, walking when I thought I could get away with it.  It was miserable and my main memory is being cold and wet and dirty and just wanting to be back home for a hot shower.  Of course, being young and stupid, it never really occurred to me that walking was the one surefire way of making the whole damn thing as cold and as miserable as it possibly could be.

We had to run at my next school too, and I once accidentally ended up on the cross country team.  I still loathed it and ran as slowly as I could get away with, but for some reason or other, one day only three people turned up for a compulsory run, and two of us got picked for the team.  Needless to say, I didn't suddenly discover a talent for the sport when I was running for the school.... although I don't think I came dead last.

I think it's fair to say that something changed.  I wouldn't say that I really love running, but clearly I now do quite a lot of it.  I imagine that my eight year old self would be shaking his head in astonishment at the idea that I might voluntarily run 15-20 miles a week.

Exactly when my attitude to running changed, I couldn't say.  I was trying to work it out when I was out with Running Club on Monday evening (6.56 miles in 51 minutes at a moving pace of 7m44s per mile, thanks very much...).  I was really happy to be able to sustain that sort of pace over that kind of a distance.  My "usual" pace is something closer to 8m15s, so that's noticeably faster.  As I was running, I realised that, far from trying to keep something in the tank and modifying my pace to a more comfortable level, as I always used to do, now I push hard all the way to the finish.  I'm sure I can still probably run faster and I'm still holding a little something back, but on days like this, I run to the point of feeling distinctly uncomfortable and keep pushing on.

Why?  I don't know.  I honestly don't know.  Although I'm running more than ever before, I still need to be mindful of the impact my MS has on my body.  I get fatigued easily, and quite often after a run like that I will find myself running on fumes and will need a little nap before I can get on with the rest of my day.  It seems ironic that I discover a capacity to push myself into the red at a time when I should probably be holding more in reserve.  But at the same time, I've never been more aware of how much I value the ability to push myself like this.  There might come a time when I can't run like this.  The mechanical problems I've had over the last year or so and the loss of muscle strength and flexibility in the left side of my body have really brought home how precious such a simple pleasure can be.

Coincidentally, I read an article yesterday that postulated that we're all joggers and not runners:

"Can what you do really be described as running? Runners vault across the surface of the Earth, wind whipping through their hair as they're overwhelmed by the freedom of possibility. That's not us. That's not what we do. We trudge reluctantly from foot to foot, our faces pasted with drool-crust from last night's sleep, cursing ourselves for ever thinking that this was a good idea. The wind has never once whipped through any part of my body during a jog because, if it looks like it's going to be very windy – or rainy, for that matter, or warm – I take off my shoes and go back to bed. For I am a jogger."

Hm.  I'm sorry, but I'm a runner.  I'm not especially fast, lithe or athletic, but I am stubborn to the point of stupidity and will go out to plod about whatever the weather or however I'm feeling.  If that makes me a runner, then so be it.

I think it's a form of mental illness, to be honest.
Posted by swisslet at 21:16

Email ThisBlogThis!Share to TwitterShare to FacebookShare to Pinterest
Labels: crazy in the coconut, exercise as therapy, we do not talk about running club, WTs