everyone seems to know the score.... 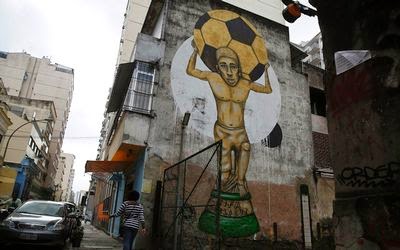 I've been very much enjoying the magic of the World Cup over the last few days.  Global coverage and the financial muscle of the big European teams means that there aren't many players we don't know, but there's still something undeniably magical about this event.  We've been having sweepstakes and prediction competitions at work (I've variously drawn Ecuador, Ghana and Algeria, so I'm not expecting much of a return there) and it's great to get home to watch a game with my tea.  I'm not even that bothered about how England do.  Yes, of course it would be great if we managed to string a few performances together and had a bit of a run in the competition.... but I've been watching England for long enough to know not to expect that.

One thing has been bothering me though: the cost.  When the UK was awarded the 2012 Olympics, there was non-stop moaning for several years about how much the games were costing us to run.  Much of that moaning disappeared when the event was such an enormous success, but the fundamental truth remained: how could we spend that much money (around £9bn) on something so frivolous when our economy is in recession and so many people are genuinely struggling to make ends meet?

It's much more incongruous in Brazil.  Yes, the size of their economy has now overtaken that of the UK and they are now something like the sixth largest economy in the world, but how many slums do you see on the outskirts of major British cities to compare with the favelas in Brazil?  In a population of 200m people, the average annual salary is something less than £5000.  The average salary in the UK is £26,500... but I'd wager the poorest person in the UK is substantially better off than the poorest person in Brazil.

So how can they justify an expenditure of $11bn on a World Cup (with billions more money to be spent staging the 2016 Rio Olympic Games)?  That's approximately equivalent to one whole year of the cost of Brazil's welfare programme, the bolsa familia.  A whole year.  I know that football is a religion to the people of Brazil, and I'm sure that they will look back on this tournament the way that we Brits look back on the 2012 Olympics.... well, they will if they win, anyway.... but wouldn't more people benefit from the welfare payments and a direct reduction in poverty and hardship? 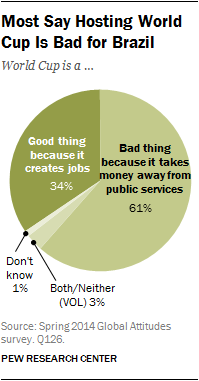 The study above, published this spring, suggests that the Brazilian people viewed the World Cup with similar scepticism to public perception of the 2012 Olympics before the Queen parachuted into the Olympic Stadium with James Bond and all bets were off.  Now that the tournament has started, I'm sure the host nation will forget all that and just focus on the football.  It's perhaps worth noting at this point that South Africa, hosts of the 2010 World Cup, recouped less than 10% of the cost of putting on the tournament (about $2bn.... a number that highlights quite how much money Brazil are spending on this tournament and how it's foolish to think they will make much of it back.

Thinking about these numbers makes me feel uneasy.  The World Cup is brilliant, and for all that us English like to sing about football coming home, Brazil is the spiritual home of the game... but how can a country like Brazil support this in the face of such poverty amongst so many of its population?  We'll sit at home drinking beer and hoping England don't embarrass themselves, and the in-no-way-corrupt executives at FIFA will sit in their marble and lapis luzuli encrusted HQ in Switzerland (or their luxury hotels in Brazil) and count their backhanders, but what of the legacy?  This may yet be the best World Cup ever (even as the Mexico hold the hosts to a 0-0 draw as I speak)... but at what cost?  Is it really worth it?  Aren't we better than this?  Can we really, honestly say that the money couldn't be better spent?

Middle class guilt, right?  Written as I watch a game from the comfort of my own home.  Never mind, I'm sure the 2018 World Cup in Russia and the 2022 tournament in Quatar will be both be humanitarian blockbusters where money will be purely secondary to football and the advancement of mankind.... right?  Right?
Posted by swisslet at 21:55