At Glastonbury, you do things a bit differently..... including choosing the outfit you are planning to wear for the main headliners on Saturday night. 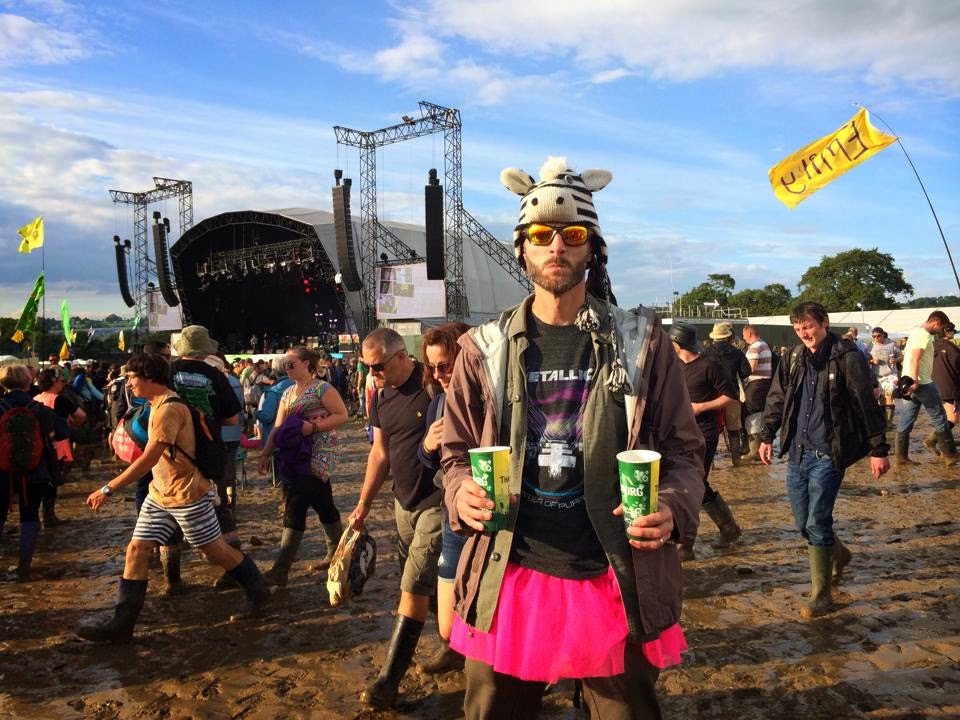 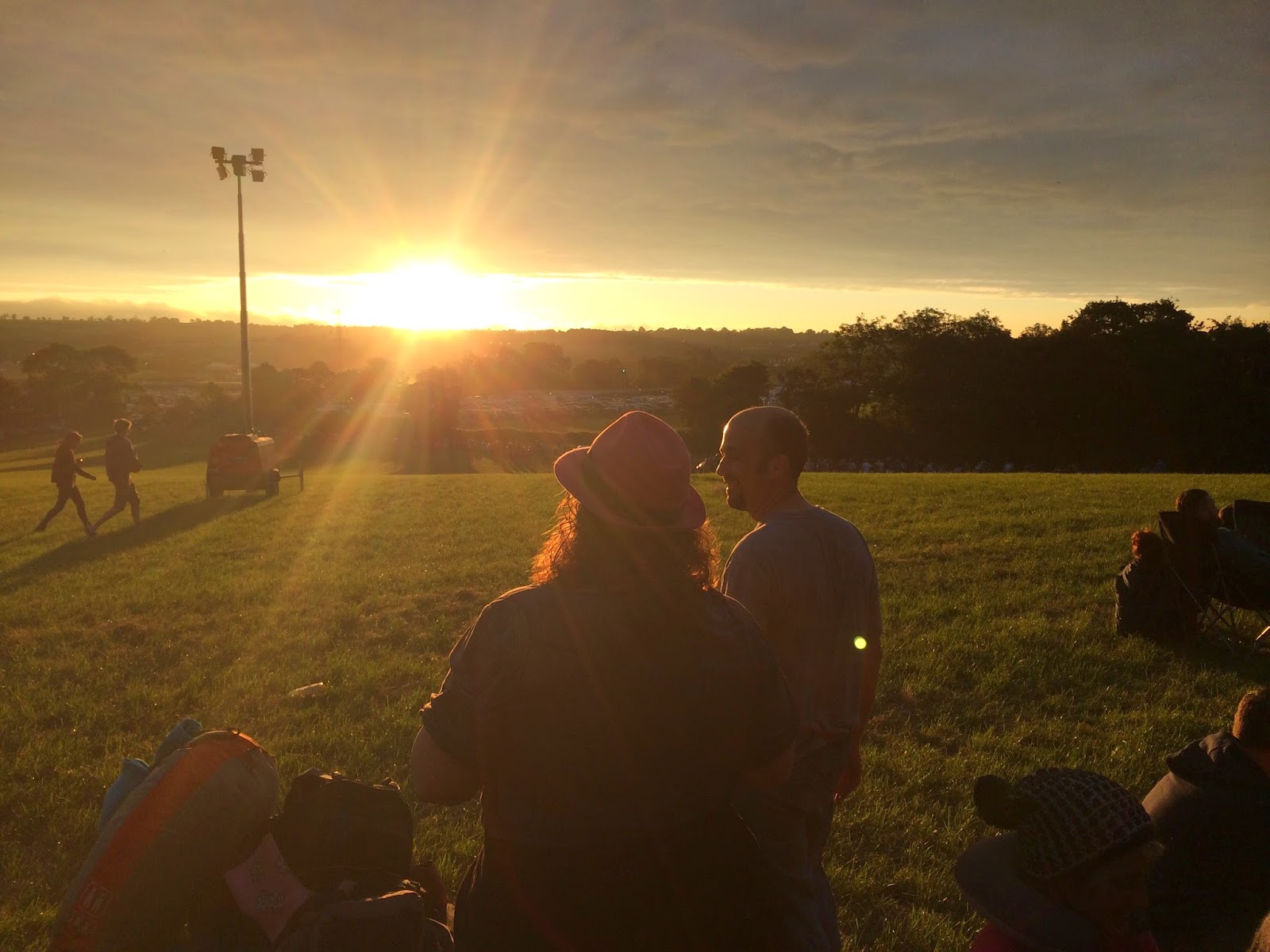 Glastonbury 2014 was a real blast.  After a golden run of luck, it was a real struggle to get tickets this year.  I was convinced we weren't going to go, and so when things fell into place, I was determined to make the most of it.  Having Metallica announced as headliners shortly afterwards was the cherry on top.

We were in the queue to get into the site on Wednesday morning and watched the sun coming up at around 5am as we waited for the gates to open.  It was an early start, but we were in by 09:30 and had our tents pitched by around 10am.  We try to camp in roughly the same spot every year, but were forced to move when they opened the Park stage a few years back, and had to move again this year because of a shift in the location of Arcadia's giant fire-breathing spider.  I don't like all this change, but we got in early enough to pick a spot we were all happy with, pitch the tents and then crack out the now-traditional mojitos.  We used to be pitching in the evening, but we're now getting in earlier and earlier and end up drinking potent cocktails at around 9 in the morning.  Oh well.  Glastonbury is different. 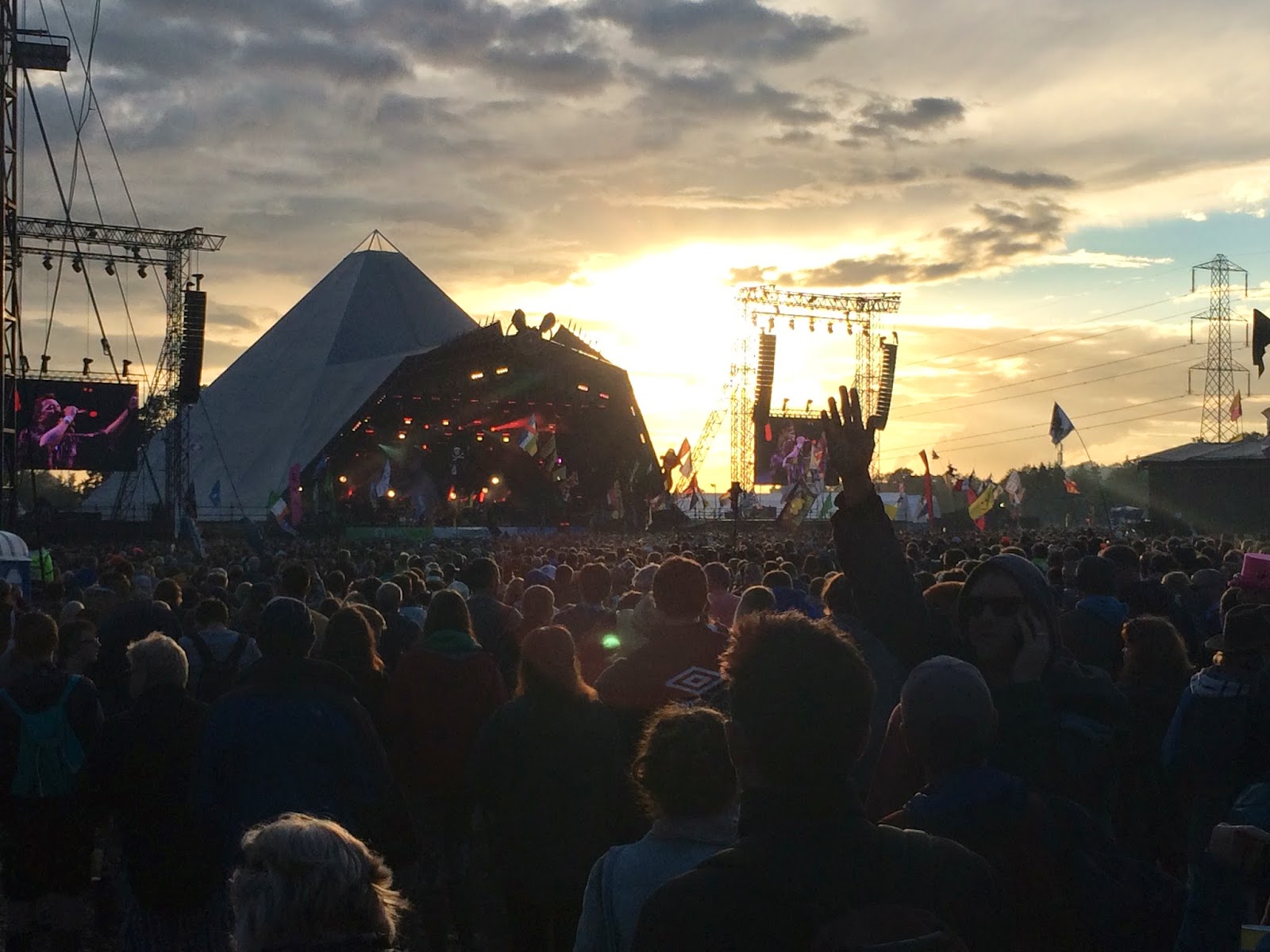 I had kind of the same festival experience as normal, but also different.  Much was made of the weather, with Somerset apparently having the wettest summer on record, but in the end, the ground was rock hard.  It rained and stormed and thundered and lightninged; it was muddy... but I've been to far worse.  As usual, it was the kind of weather where you wear your raincoat and get a sunburned nose.  I watched a few bands, including Elbow (sundown during their set pictured above), Blondie, Dolly, Billy Bragg, The Wailers, Lana del Ray, Manic Street Preachers, Band of Skulls, a bit of Arcade Fire, Kaiser Chiefs ... and of course, Metallica. 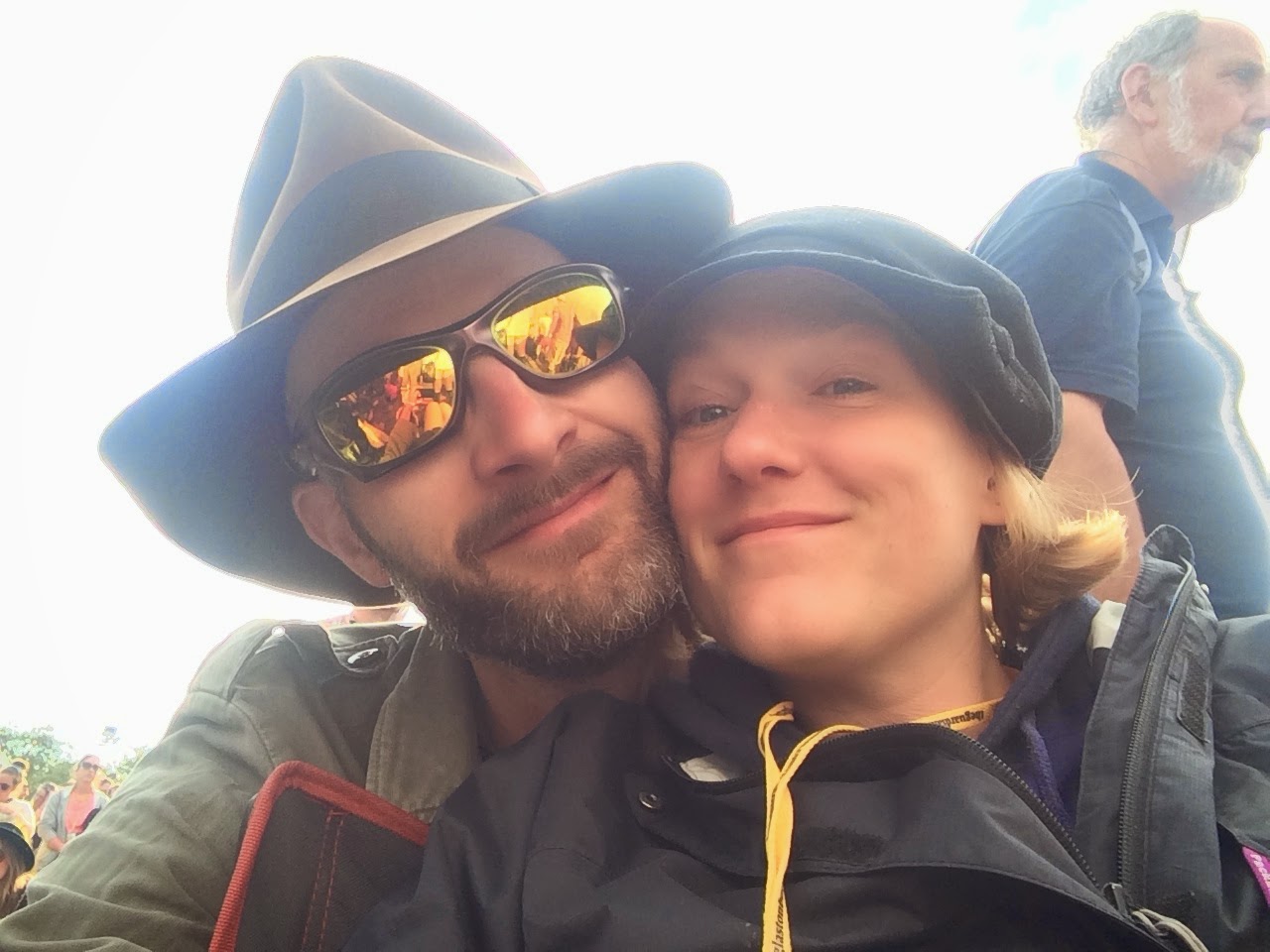 There was whole lot of ridiculous fuss about Metallica.  Not a Glastonbury band, apparently.  Well, this is manifestly bollocks.  Glastonbury is famous for having headliners who are either up-and-coming or legends at the back end of their careers.  They apparently don't pay as much as other festivals, and the big bands have to really want to play here to come.... U2 in 2011 are a good example.  Metallica are one of the biggest bands in the world, and apparently they first asked Michael Eavis if they could play here some twenty years ago, around the time of the Black Album.  He told them that their time would come, and this year it did.  Metal bands aren't terribly well represented at Glastonbury, but there's no reason why they shouldn't play here.  For me it was a whole lot of fuss about nothing.

I've seen Metallica a few times, and they've never been less than brilliant.  Even if I was the only person in front of the Pyramid Stage to watch them, I would still go.  As things turned out, they were mostly full and very, very well received.  It looked a little at the start like there was a tight crowd at the front and then a lot of curious, but slightly scared, people hanging back.  As the set went on, the gap closed, and by the time they played "Enter Sandman", the field was rocking.  You have to love a band that can come on and open their set with "Creeping Death" followed by "For Whom The Bell Tolls".  Hello hippies, we're Metallica.

Actually, perhaps the most thrilling moment of the whole festival for me was about twenty minutes after Jack White had left the stage and they began soundchecking Metallica's guitars.  It was very, very loud... as if the festival was giving waverers advance warning of what was to come.  Leave now!  While you still can! I loved it.  I've been a fan since I bought "...And Justice For All" on tape back in 1988.  I was in the company of one of my oldest friends who used to sit and listen to the album with me when we were at school, and we were so excited.  Best headliner I've ever seen at Glastonbury and one of the best gigs I've ever seen.  Everything was right: the location, the anticipation, the band who were clearly well up for proving a point.  Ah, outstanding. 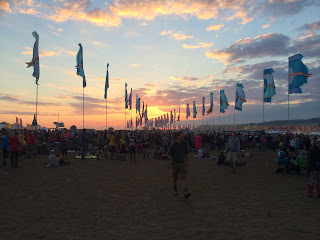 There were a few negatives: the littering and lack of respect for the farm annoys me a little more every year.  To be fair, lots of people do take their pint cups and cans to a bin, but lots of people just toss them, and the place looks like a bombsite by the end of the week.  People are generally very nice, and especially in a muddy year, there's an air of we're-all-in-this-together.... but equally there are other people who seem to be lost in their own world where they don't give a shit about anyone but themselves.  They run a queuing system at the Greenpeace showers where they give you a ticket and you either wait for your turn, or you come back later.  They don't ask much, only that you wait your turn and use the supplied eco-friendly products and not your own.  I saw some kids coming into the Greenpeace field and fishing into their bag for a few books of raffle tickets.  They checked the colour and number they needed, selected a ticket and then walked past the queue and in.  Not cool.  Apparently lots of girls in the ladies side insisted on wearing their bikinis, queuing up for the one shower with a curtain, and then using their own conditioner in their hair.  Not cool.

Ah, but it's still a wonderful place, and there's no better feeling than spending a few days here with the people you love.  Same time next year?  I've been twelve times and there's still so many things I haven't done.  Tipis, for one thing.  There are some things I NEVER want to do though: I saw some people properly running one morning - you know, wearing lycra and headphones and jogging through the site.  So, how do they shower? Amongst all the other stuff you haul into the site, why would you want to carry more?  As we were walking out of the site, I realised that. although I've walked for miles and miles, not got enough sleep and spent about five days standing up.... actually, my body is more rested than during a normal exercise week.  A few days not running and all those little aches and pains seem to have disappeared.