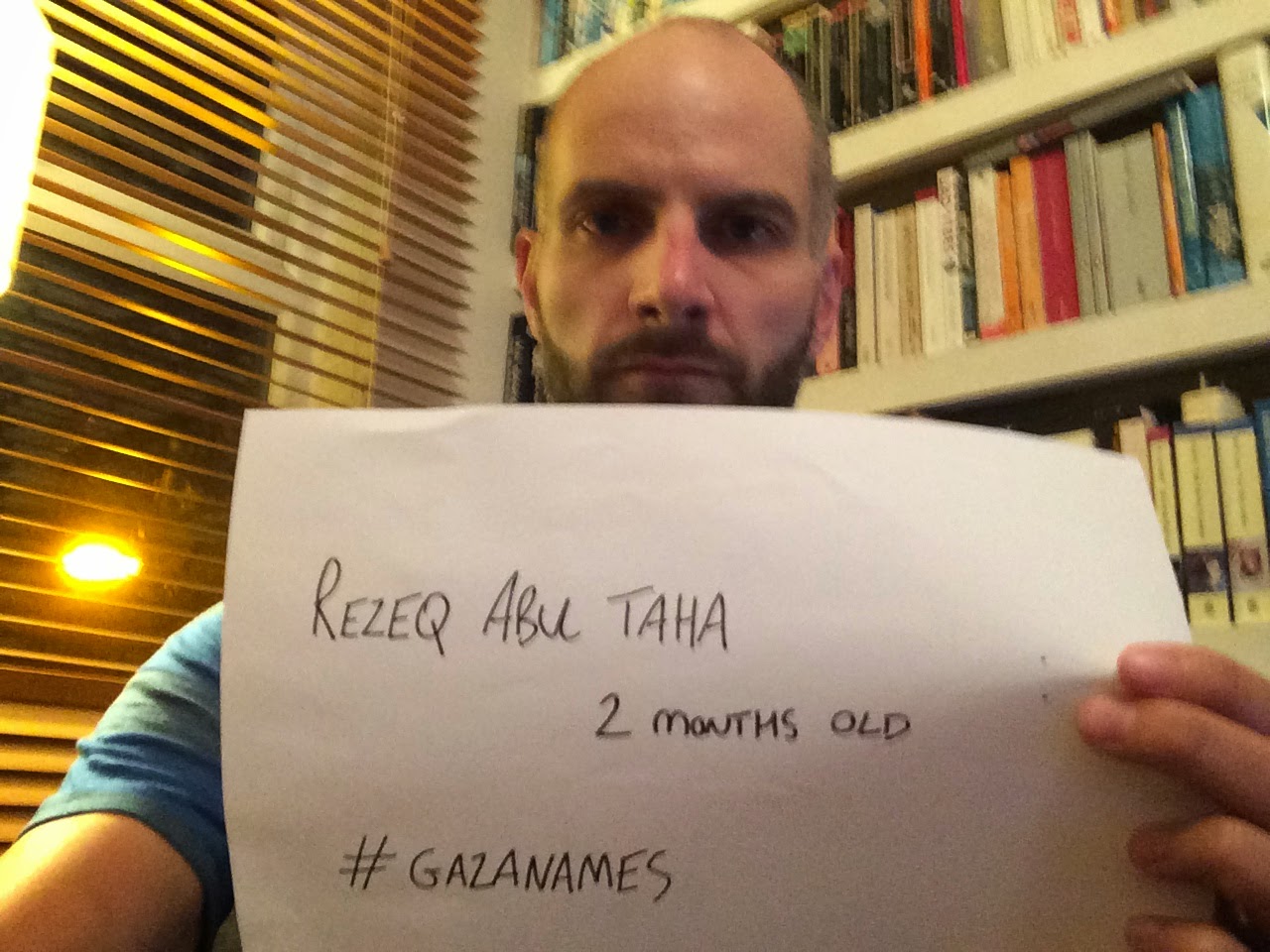 I did this as part of the #GAZANAMES project.  The idea is to remind people that the victims of this war are not merely statistics or collateral damage, they are human beings.  Rezeq Abu Taha was killed in Rafah on Saturday along with three other members of his family in an airstrike.  He was two months old.

I was so moved by a feeling of anger and helplessness whilst reading about the conflict and looking at the images of terribly wounded Palestinian children that I actually took some direct action.  It might not be much, but writing to the British Foreign Minister and Ken Clarke, my own MP, seemed like the very least I could do.  Only once before have I written to Ken, and that was in the wake of the invasion of Iraq.

Here's what I sent Ken over the weekend:

Like everyone else, I've been appalled by the footage that I've seen from Gaza. The final straw for writing to you is the latest news about the shelling of the UN school. This quote from Pierre Krähenbühl, commissioner-general of the UN agency for Palestinian refugees, UNRWA, really jumped out at me and brought tears to my eyes:

"Last night, children were killed as they slept next to their parents on the floor of a classroom in a UN-designated shelter in Gaza. Children killed in their sleep; this is an affront to all of us, a source of universal shame. Today the world stands disgraced."

He's right: I feel shocked, ashamed and angry. I've just written to Phillip Hammond, expressing my anger and asking if we as a nation could do more to put an end to this senseless slaughter of innocents, and now I'm writing to you.

You're my local MP, your office is at the end of my street and I frequently see you at Trent Bridge, where I am a member. I wrote to you many years ago expressing similar anger about the war on Iraq, and was very impressed by your full and thoughtful response. I appeal to you as my representative to represent my anger at this slaughter. I know that we're not standing by and doing nothing in the face of this crisis, but I appeal to you to push, asking if there isn't more that we can do.

I'm sure you're as appalled as I am, so I won't go on... but I did want to let you know my feelings and to ask that you represent them in parliament with the government.

You can email your own MP from here, and you can mail the Foreign Office from here.  It only takes a moment and it will add your voice to the press of people calling for our government to do more.  It's got to be better than doing nothing, hasn't it?

I'll leave you with a couple of quotes.

'Empathizing w/ Gaza does NOT make me anti-Semitic, nor pro-Hamas or anti-Israel. It makes me human" David Harris Gershon

UN Chief Ban Ki-moon described the latest attacks on a UN school as a “moral outrage and a criminal act...yet another gross violation of international humanitarian law, which clearly requires protection by both parties of Palestinian civilians, UN staff and UN premises, among other civilian facilities....those responsible [must be] held accountable. It is a moral outrage and a criminal act.”
That's pretty strong for the UN, wouldn't you say?
[although, in fairness, it must be said that Palestinian weapons caches have been found in three of the six schools attacked]

I know that this is a complex issue, with atrocities committed by both sides.  In addition, I'm very aware that much of the public outrage is driven by the coverage we see on our television screens, when other atrocities in the globe are going far less reported.  That said, why do we need to get into the rights and wrongs of who is killing who and for what reason?  Isn't it enough that innocent people - children - are being killed?  The Israeli spokesperson who said that "nearly half" of the 1,800 or so Palestinian dead were combatants was spectacularly missing the point (as well as exaggerating the figures: the UN estimate is closer to 15%).  Even so, that figure still leaves 1,000 or so innocent civilians dead, doesn't it?  How can that ever be justified?  (and before you speak, let me first point you at this excellent blog post too: Everything is justified, because Hamas)