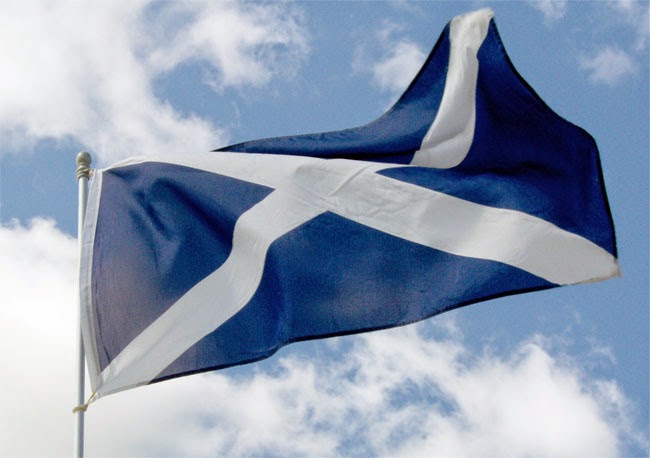 When it comes to the idea of Scottish independence, I was initially instinctively opposed.  Perhaps I'm naturally a conservative-with-a-small-c, and maybe I'm just  resistant to change... but I've grown up as part of the United Kingdom of Great Britain and Northern Ireland and I didn't see any particular need for change.  After all, they've got their own parliament, they've got their own football and rugby teams, they compete separately at the Commonwealth Games.  I get to cheer Chris Hoy at the Olympics.  Win: win.  What more could they possibly want?  We're better together, aren't we?  It was the English defeats to the Scot at Falkirk and Stirling Bridge that taught us how to stop the French heavy cavalry at Crecy and Agincourt. We're just made for each other.

With the referendum only a week away, I've changed my mind.  I don't get a vote, but my views have shifted.

I find myself deeply uninspired by Alex Salmond, and if I was Scottish, I'd want to know why a man who has spent his whole life campaigning for Scottish independence seemed completely flummoxed by the idea that an independent Scotland would not automatically be granted entrance to Europe and would not automatically be allowed to use Sterling as their currency.  Um.... shouldn't you have thought of that eventuality at some point in the last thirty years or so?  You know, maybe come up with a plan b or something?  No, he's a little too self-satisfied for my liking.

That said, there's a fundamental principle at stake here: the citizens of Scotland have an opportunity to vote for independence.  If the majority says "yes", then I think we -- all of us -- should do everything we can to support them as they set up their newly independent nation.  That's how self-determination works, isn't it?

I might criticise Alex Salmond (when asked to name the three greatest Scotsmen, he apparently went for Robert the Bruce, William Wallace and himself) but look at what we've got in Westminster: David Cameron and this government of old Etonian cronies.  Any better? No, didn't think so.  Eton is an awfully long way from Gorbals, isn't it?  Hell, it's a pretty long way from anywhere normal.

Flying a saltire over Downing Street and desperately cobbling together a last minute set concessions towards greater Scottish autonomy within the union fools nobody.  It's pathetic and it's embarrassing: if the Scottish people want independence, they'll vote for it.

Save yourselves, Scotland.  It's too late for us, but you can still save yourselves.  Who knows: perhaps Scottish independence will lead to genuine electoral reform in England, then we'll all be better off for the change.

I can still cheer for Chris Hoy, right?