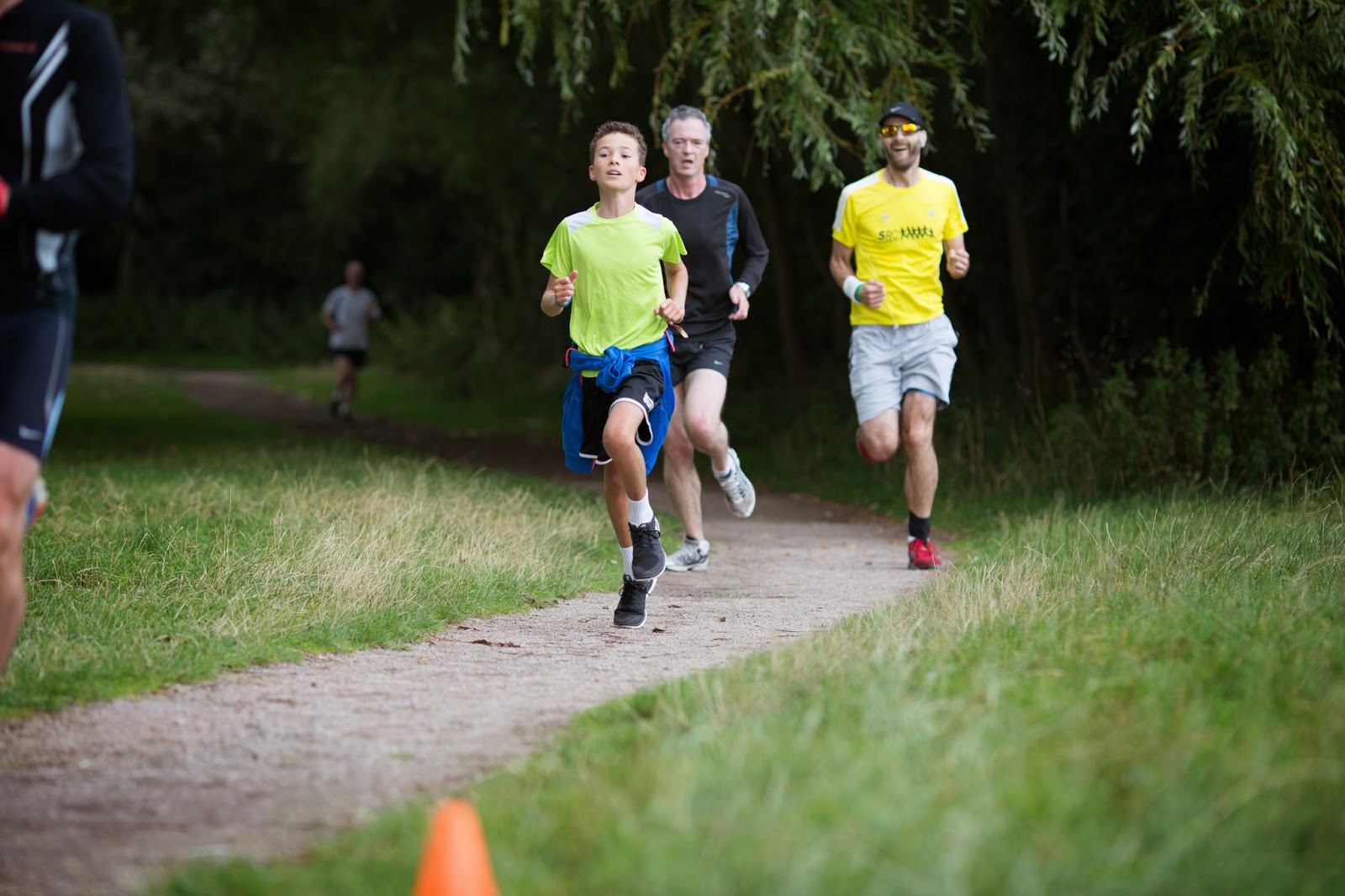 The London Marathon ballot is due to be drawn in early October.  We're in the fortunate (!) position of already knowing that we're going to be running, so it makes sense that we took advantage of that to book a hotel before the rush.  Not surprisingly, hotels around the Greenwich Park start are already fairly busy, but we've put our towels down on something that's within walking distance of the start.... you don't really want to be worrying about hacking across the underground on the morning of the longest run of your life, do you?

That simple act has, however, made the whole thing feel very real.  It's still 215 days to the race, and I don't really need to start a 16 week training programme until the beginning of January..... but it suddenly seems to be looming rather large in my diary.

I've started doing a local Parkrun - a timed 5km open to everyone that takes place every Saturday morning.  The guys from the Colwick Parkrun run an interval training session just around the corner from me every Wednesday night, and for the last couple of months, I've been going along.  We mostly run around in circles at gradually increasing pace.  It's hard but clearly very good for pushing your pace and making you faster.  I both hate it and love it at the same time.... but it was becoming a bit embarrassing that I'd never actually been to a Parkrun as they ask every week who got a PB at the weekend.

So I went.  It's really good fun.  I get nervous every time, but it's around 200 people of massively varying abilities: the course record is 15 minutes, but there are also loads of kids, people running with their dogs and even a few pushchairs.  It's very inclusive and a lot of fun.  It's also really hard work for a relatively one-paced runner like me.  Running a shorter race at a much faster speed is both physically and mentally challenging.  I can clearly manage the distance without too much difficulty, but I'm looking to up my pace from a fairly steady 8-ish minute mile to something much closer to 7 minute miles.  I tend to get excited at the start and go off too fast, leaving me blowing and hanging on for dear life over the last mile.

These pictures are from my first Parkrun, and the chap running with me is a friend of my friend Abi who latched onto me after a couple of miles and gently encouraged me home, not letting the fact that I was listening to Metallica and too tired to make any sensible conversation put him off (and just look at me running along with my mouth lolling open).  I clocked 23:09... which is good, but also frustratingly close to being 22:something.  There's always a quicker time, right? 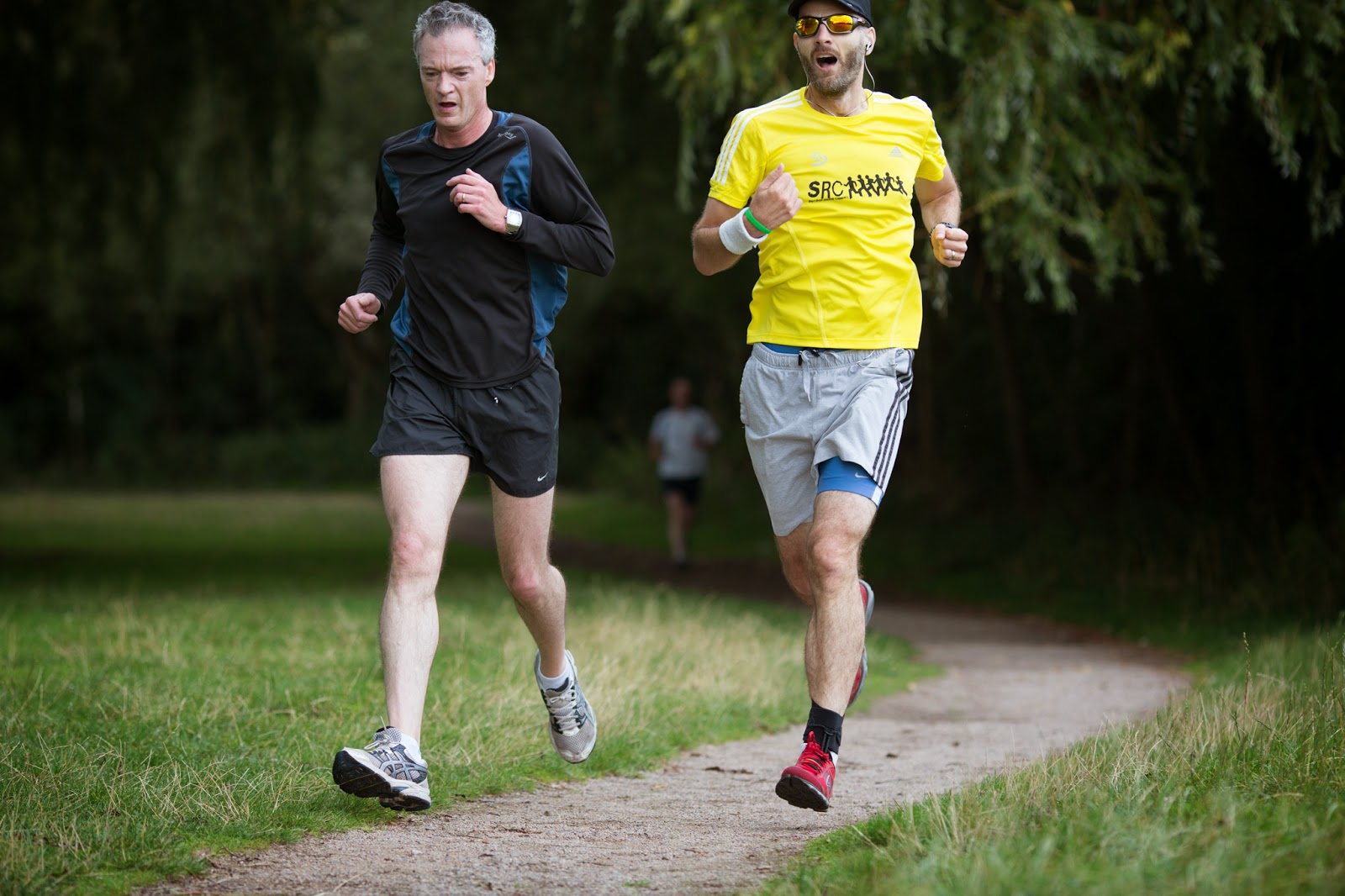 I paced myself a bit better this week, starting a bit slower and saving something for the last 100m.  I beat my PB by a solitary, measly second.  On the one hand, a PB is a PB.  On the other hand, that's a lot of effort for one second.  Still, it's a great challenge and I'm sure it's good for my overall running.

Quite what impact it will have on my pace over 26.2 miles remains to be seen.
Posted by swisslet at 20:15