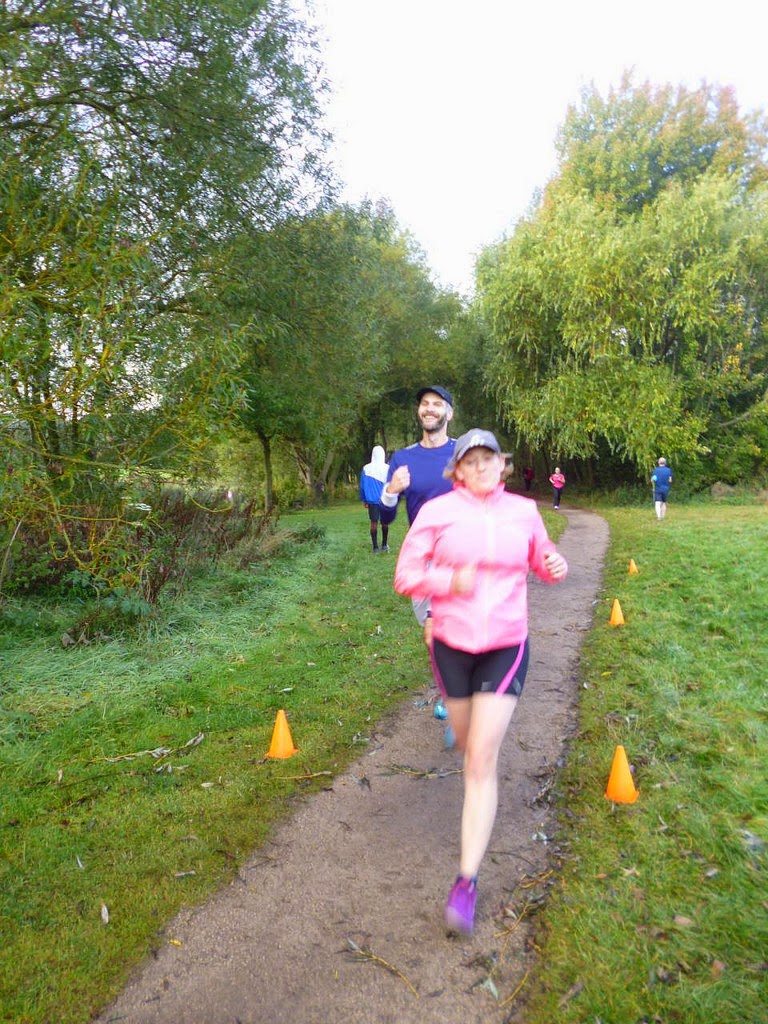 I've started running a bit more with my wife.

It's not like we never ran together before, because we did. We do.  When we are travelling or staying somewhere, we'll often take our running kit and go out together and it's really not that big a deal.  It's not something we do very often though, mostly for the very simple reason that we don't run at the same speed.  Let me give you a Parkrun 5km comparison: my best time around Colwick Park is 22:48.  My wife's PB is 28:56... and that was when I towed her around a couple of weeks ago and she broke her previous best by more than a minute.  That's quite a big difference in speed.  She's not running at her absolute fastest at the moment.  Her half marathon PB is something like 2hr 2m, and I'm pretty sure she's got a sub-2 hour race in her, but even so, there's more than a minute a mile difference in our pace.

I think the furthest we've ever run together is about 9 miles around the lake in Zell am See a couple of years ago, and I found it quite tough.  C's natural speed is a little between gears for me.... slower than my normal pace, but also quicker than my slower pace.  It's awkward for me and actually pretty tiring and I'm sure it's annoying for her too.  As we're going to be running the London Marathon together next year, I suppose we'd better both be getting used to it.

We've run together for the last couple of Parkruns.  On the whole, I've found it pretty liberating to be able to just enjoy running without feeling the need to kill myself every week looking for a PB.  I think C has found it nice running with me too, partly because we don't see each other all that much during the week and we get to spend some time together, but also because I help her to run faster.  She's finding her form and just starting to try and up her mileage, but she's been finding it tough: she has a very demanding job that takes up a lot of her time and energy and she's also getting over a cold.  At Parkrun on Saturday, she just didn't have anything in the tank and actually stopped a couple of times to catch her breath.

Now, I find stopping harder than running slowly.  My own personal approach to running is to flog myself unforgivingly: however I feel, whatever the weather is doing....I'll be out putting the miles on the clock.  I'm reluctant to stop because I'm afraid that one day I will be forced to stop for good.  I don't even really like to stop at traffic lights because it always feels harder to get started again than to just keep going.  I don't respond well to stopping.

...so when my wife stopped at Parkrun on Saturday, the first time I just stopped and made sure she was okay, resuming when she was happy to start running again a few seconds later.  The second time, I tried to encourage her and tell her that she had less than a mile to go and suggesting - jokingly -  that we weren't walkers.  I was trying to be encouraging.  Apparently this didn't work.  She turned on me and snarled: "This is your mania, Tim.  Not mine".

At that point, I nearly ran off on my own at my own pace.  Fuck it.  I'm not giving up my own run to be spoken to like that and it wasn't even my idea to run the marathon together in the first place....only to enter and run myself.  It might be my mania, but I never asked anyone else to come along for the ride. Fortunately, I resisted the urge and we finished the run together.  Even with an empty tank, C managed a sprint finish, before bursting into tears.

She was less than a minute off her PB, even with the stops.  She made sure she finished in front of me too.  She always does.

I'm clear on my reasons for wanting to run 26.2 miles, but I think my wife's own motivations - even if she doesn't want to admit it even to herself - go beyond simply wanting to make sure that I don't break myself along the way.  Let's put it this way: my mania may well be my own, but I'm not the only one with manias in this marriage.

I want to run the marathon with my wife and I'm actually looking forward to training with her because I like spending time with her and it will be wonderful to achieve this together.

....I think we might need to work on our teamwork though.
Posted by swisslet at 19:53

Email ThisBlogThis!Share to TwitterShare to FacebookShare to Pinterest
Labels: C, crazy in the coconut, exercise as therapy