I’m going through another comic book phase. This one is being greatly facilitated by my discovery of Comixology… an app that provides a fantastic way of reading this stuff on a tablet / smartphone. I’m not going to preach at you though and tell you that this is the cat’s whiskers, mind. The one format isn’t inherently better than another and both are just different ways of accessing the same material. It’s exactly the same with books: I’m happily able to switch between reading books on the kindle and reading an actual, honest-to-goodness physical book made of paper. Ultimately, both formats do the same job.

Having said that, I won’t lie to you: sometimes it’s just super convenient to finish reading one thing and download the next one in the series almost immediately so you can push on through. It takes up a lot less shelf space on an iPad too. And comic books look *amazing* on a retina screen.

My first download was an old classic, and the comic book that truly got me started: Frank Miller’s “Dark Knight Returns”. For some reason, it was 69p for the first volume, and all four together cost less than the collected “graphic novel” version. From there, although I was sorely tempted to download Watchmen or Sandman or other classics that I already own, I started looking around for quality stuff that I might well have missed. Luckily, Comixology seems to sell almost everything and has a very comprehensive library from any comic book imprint you might care to mention. I thought I’d start with some Eisner award winners:

Superman: Red Son.. a re-imagining of a classic hero based upon the “what if” scenario of Kal-El landing in 1950s Ukraine instead of Kansas and growing up as a Soviet icon. Superb.

Y: The Last Man… a dystopian future where all male mammals have suddenly and (thus far) inexplicably dropped dead across the whole planet, apart from one teenager and his pet monkey.  Imagine that: 495 of the Fortune 500 CEOs dead; 95% of all commercial pilots; 85% of all government representatives; 100% of Catholic priests; 2.9 billion people.... dead in an instant.  The series follows this boy and the surviving women as they try to make sense of a radically altered world. Promising.

100 Bullets…. A somewhat noir concept where, as Wikipedia says, “the core concept is based on the question of people willing to act on the desire of violent revenge if given the means, opportunity, and a reasonable chance to succeed. In each issue, the mysterious Agent Graves approaches someone who has been a victim of a terrible wrong. Graves gives them the opportunity to take revenge by providing a handgun, 100 bullets, and documentation about the primary target responsible for their woes. He informs the candidate the bullets are completely untraceable by any law enforcement investigation, and as soon as they are found at any crime scene investigations will immediately cease”. I’ve struggled with this in the past, but I thought I’d give it another go. Jury’s still out for me after one issue

My favourite though is a series called “Fables”. Wiki again: “a comic book series created by writer Bill Willingham, published by DC Comics's Vertigo imprint beginning in 2002. The series deals with various characters from fairy tales and folklore – referring to themselves as "Fables" – who have been forced out of their Homelands by "The Adversary" who has conquered the realm. The Fables have traveled to our world and formed a clandestine community in New York City known as Fabletown. Fables who are unable to blend in with human society (such as monsters and anthropomorphic animals) live at "the Farm" in upstate New York” 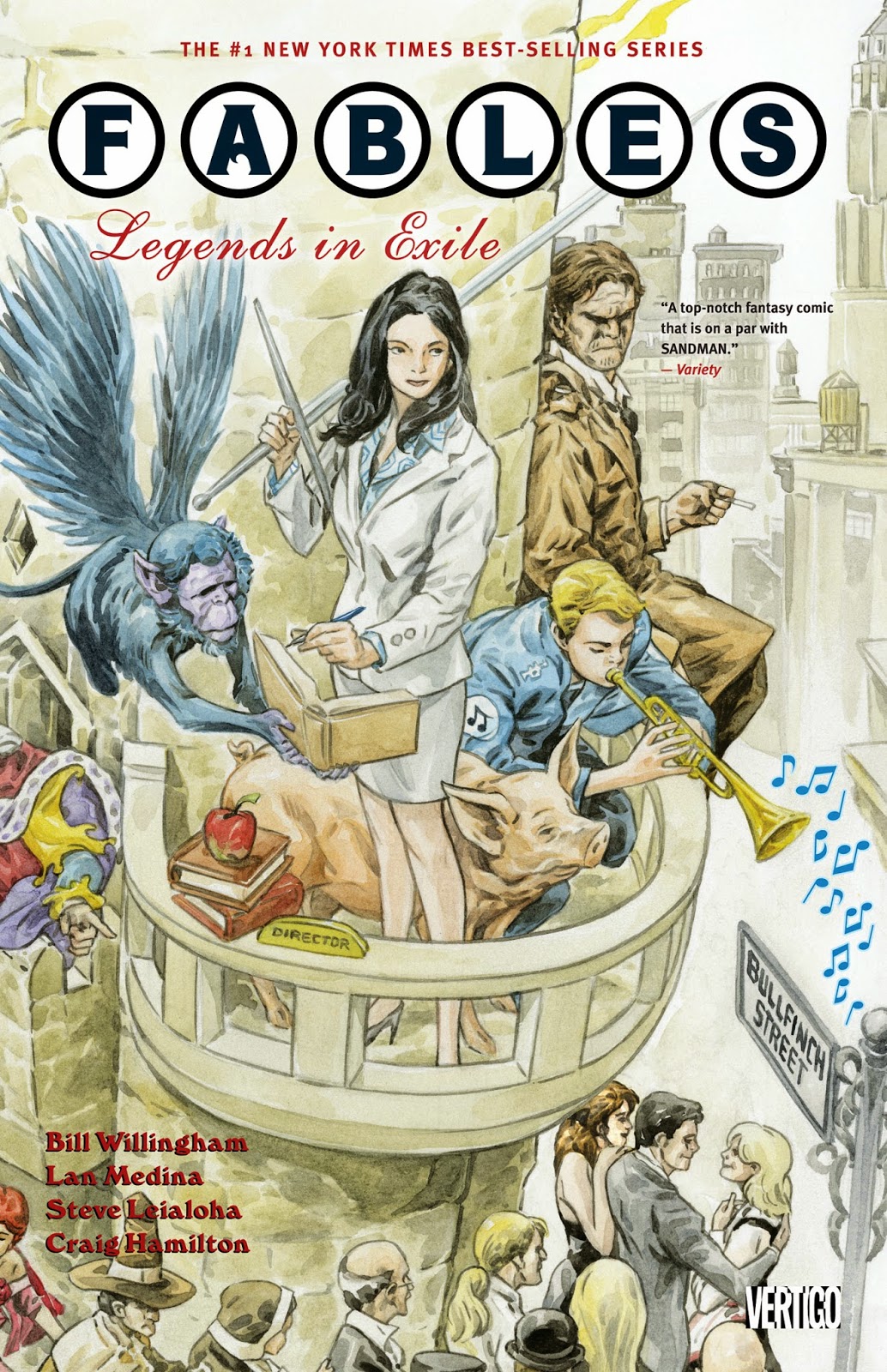 Old King Cole is nominally in charge when the series starts, but the show is really run by Snow White with the (reformed?) Big Bad Wolf as the community’s sheriff. Other characters include Pinocchio, Little Boy Blue, the three pigs, Prince Charming (successively married and divorced by Snow, Cinderella and Sleeping Beauty), Sinbad, Beauty and the Beast, Goldilocks…. The list goes on. I’m sure I won’t do it any justice at all by trying to explain why I love it, but it has a dark edge and embraces the Grimm-style original, bloodier tales and I think the whole thing works rather well transplanted into a modern day New York.

Of course, the danger with being able to download these on demand is that I’ve been doing exactly that and my paypal account is taking something of a hammering (and, a little like Amazon’s pricing strategy for kindle books*, the e-comics are not as cheap as you might imagine). Well, it feels like a good use of both my time and my money to me, and I happen to think that things like this have a value and it’s a price I’m prepared to pay.

* Yes, I do know that Comixology has recently been purchased by Amazon and that there has been uproar about their withdrawal from Apple’s in-app purchasing (you buy your comics through their website directly). It might not be quite as convenient now, but it works well enough if you ask me.
Posted by swisslet at 20:48

Email ThisBlogThis!Share to TwitterShare to FacebookShare to Pinterest
Labels: books, boring geek stuff, culture etc., looks like we got ourselves a reader, nerdgasm