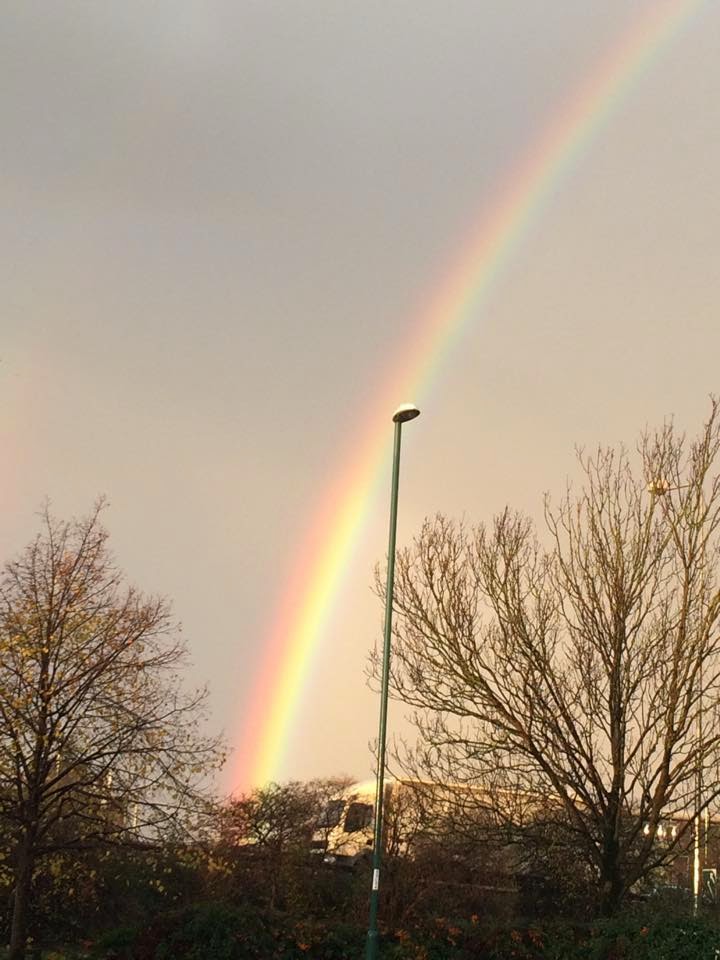 I had to take the car I almost never drive to the garage to be serviced today.  On the one hand, this was a bit of a bind because it meant I wouldn't be cycling and would be a little bit later for work than usual (and it seems I'm a creature of habit about that sort of thing).  On the other hand, it was absolutely throwing it down with rain at a time when I would normally be cycling to work, and when I got out of the car to walk to the office, the sun had come out and there was a beautiful rainbow.

So pretty, I took a photo.

The colours were so distinct, that I found it impossible not to think of the mnemonic that helps you remember the order of the colours of the spectrum..... except that I don't use the normal one, and two different ones are embedded in my head.

I was about eight years old and we were just learning about the spectrum of colours in science. Richard Of York Gave Battle In Vain.  Red, orange, yellow, green, blue, indigo, violet.  You know the drill.  Our science teacher then challenged us to come up with our own mnemonics.

I came up with this:

I was really very pleased with it.  And yes, even at eight years old, certain parts of my personality appear well established.

Sadly, it didn't win the competition as my best friend came up with this:

Dammit.  An important early lesson that simple is better.

A lesson I ignored, obviously.

Anyway.  So that's what I think of when I see a rainbow.  That and the gold at end, of course.  In this case, I reckon it was somewhere in Beeston.  Unlikely, but it could happen.
Posted by swisslet at 18:15