In case it might have escaped your notice, Christmas is coming. 48 days and counting. In the course of a single day in the office last week, I head “Christmas Wrapping” by the Waitresses playing on the reception PA no fewer than three times. I don’t think it’s on a loop, but it seemed to be playing every single time I walked past. It wasn’t even bloody November.

I work for a retailer, and we’re naturally desperate for Christmas – or at least Christmas shopping – to start as early as possible and to last as long as possible. We had our gift guide published and our gift range out in our shops at some point in September and have been anxiously wondering why our seasonal offers weren’t flying out of the stores as the country basked in the warmest October on record. Well, at least we don’t sell jumpers and coats.

We had a big event in the office yesterday evening to launch the new Xmas advert. Apparently, this is quite a big deal, with everyone desperate to have *the* advert that takes off on social media and gets everyone talking. The John Lewis advert from last year, “The Hare and the Bear” hardly featured a product at all, but it was really the only ad that anyone was talking about. Our advert is better this year, and our leadership were clearly very proud and dished up mulled wine and mince pies as they premiered it to us (our hashtag seems a bit like the desperate attempt of someone who has just heard about "The Twitter", but it's not as bad as Debenhams' attempt this year... the Frog Chorus!  I ask you! And selfies? really?)

….but let’s put it this way, it’s probably better that they showed it to us last night before John Lewis launched their advert today. Our guys talked about creating a “social media thunderclap” and asked us to share the ad on facebook and to use the hashtag (seriously, do they know what the reaction of my friends would be if I shared something like that?). John Lewis barely need to do anything to get people excited about their advert, and apparently TV channels were involved in a bidding war to have the honour of being the first to premiere the advert. With barely any effort at all, it seems… and a mere £1m on the advert and £7m on the campaign… they look to have won again with a very cute advert indeed (if the sex trafficking of penguins is your thing). They don’t mention any products in their advert again this year, but if you look at their website, you’ll see that they’ve *created* a market for penguin stuff. There’s an app; they’ve lined up with Barnados for their storytelling charity and with the WWF over the adoption of actual penguins. They’ve got this shit covered. They are capitalists though, so if you want a large Monty plush toy? Yours for £95. Boom! Christmas owned.

Of course, all this or any other Christmas advert is really trying to tell us is this: 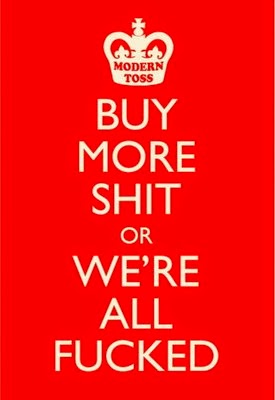 Capitalism, eh? It’s all about the kiddies.  Merry Christmas.
Posted by swisslet at 20:51