a shallow piece of dignity... 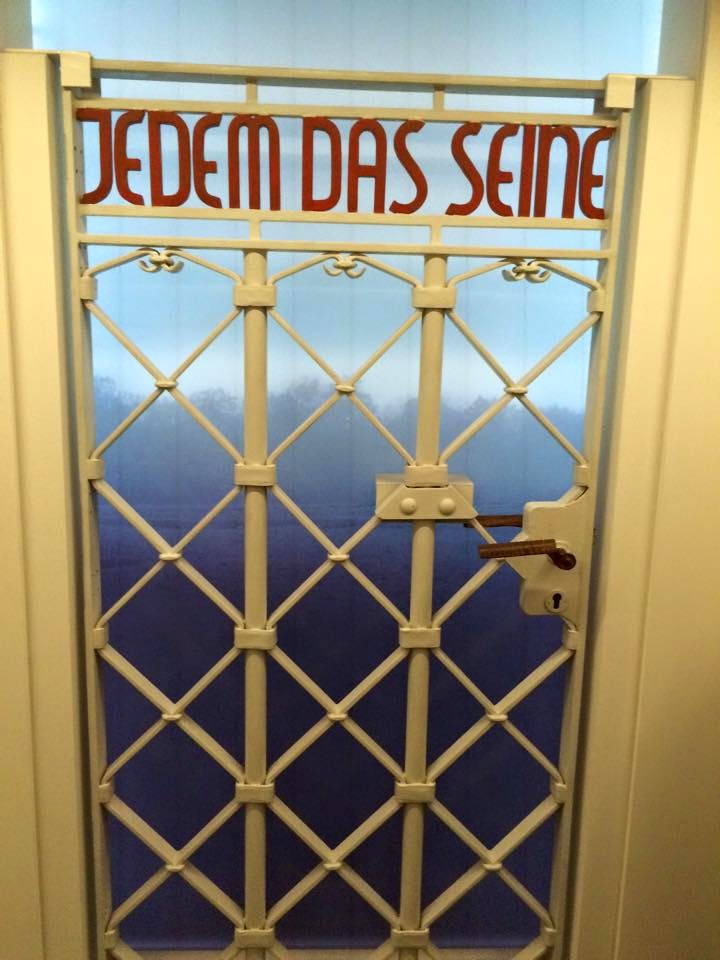 A week ago, I saw a replica of the gates at Buchenwald in the British Museum's exhibition on Germany. That caption translates as "To each his own" . The wording faced inwards towards the prisoners and was apparently carefully maintained by the inmates, with the red writing kept freshly painted.  One theory is that the Bauhaus lettering was perhaps a subtle gesture of defiance to the Nazis, but to be honest, I imagine most of the inmates had rather more important things on their mind than that..

Today marks the 70th anniversary of the liberation of the Auschwitz concentration camp; a camp that also featured some famous gates. 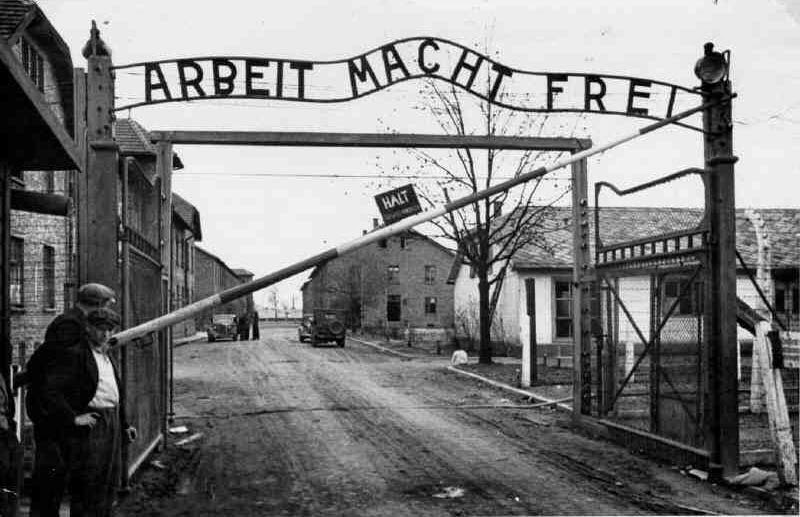 Work makes you free.  As wikipedia says about the text:

"In The Kingdom of Auschwitz, Otto Friedrich wrote about Rudolf Höss, regarding his decision to display the motto so prominently at the Auschwitz entrance:
"He seems not to have intended it as a mockery, nor even to have intended it literally, as a false promise that those who worked to exhaustion would eventually be released, but rather as a kind of mystical declaration that self-sacrifice in the form of endless labour does in itself bring a kind of spiritual freedom."
Considering the role played by the Auschwitz prisons during the Holocaust as well as the individual prisoner's knowledge that once they entered the camp freedom was not likely to be obtained by any means other than death, the cruel comedy of the slogan becomes strikingly clear. The psychological impact it wrought on those who passed through the gates of each of the camps where it was seen was incredibly powerful"

Like most other Nazi concentration camps, Auschwitz didn't leave many survivors.  Those who remain today are unlikely to live very much longer to bear first hand witness to the horrors they survived, and with their passing, the story will seem just that little bit more remote to those of us who came afterwards.

Let's just remind ourselves of some of the facts:

While under Allied interrogation, Rudolf Höss, commandant of Auschwitz concentration camp from 1940 to 1943, said that Adolf Eichmann told him that two and a half million Jews had been killed in the gas chambers at Auschwitz-Birkenau and about half a million had died "naturally". Later he wrote "I regard two and a half million far too high. Even Auschwitz had limits to its destructive possibilities". The likely death toll is probably somewhere between one and two million people.... an astonishing and horrifying number.

One to two million people. Exterminated in a single facility.  Six million in total under Nazi rule.

It's difficult to comprehend, isn't it?

Could it happen again?  Do we really need to ask the question? Has it not happened in many places since? Cambodia, Rwanda, Sudan, Bosnia....

Could it ever happen here?  Well, you'd imagine that it couldn't..... but the next time you hear someone talking about a group of people as though they are different from ourselves, just think.  Look around you: it's happening in this country right now, whether it's Muslims, Eastern European immigrants, benefit scroungers, homosexuals or whoever.... the minute you begin to think of them as "other" to yourself, then you've set a foot down the path towards those gates.

Just watch the rhetoric our politicians will be spouting as we head towards the next General Election, and you'll see what I mean.  Nigel Farage may seem like a bit of an idiot now; someone to laugh at.... but they said almost exactly the same things about Adolf Hitler in the early 1930s in Germany too. Politicians fell over themselves to make deals with him, thinking they could control him.

Those who do not remember the past are condemned to repeat it.

As my wife often points out, Brecht said "Der Schoß ist fruchtbar noch, aus dem das kroch".  The womb he crawled from is still fertile.
Posted by swisslet at 22:18