I feel like I achieved a new level of crazy today: I ran to work and back. 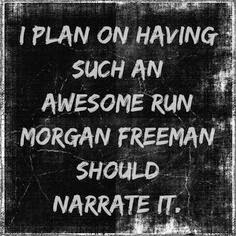 Usually, of course, I cycle. But I had an appointment for a sports massage this evening and, according to my training programme, I needed to get six miles done and won't be able to do them on Thursday because I'm heading down to Heathrow..... so I ran the 3.62 miles to work, and a few hours later, I ran the 3.62 miles home.

It felt a bit weird to be running in the pre-dawn light this morning, not to mention the discomfort I felt in my legs from my runs on Sunday and Monday... but it took me a little over half an hour and it basically felt alright, even with a headwind.  The run home was even better, in spite of the flurrying snow and the aching muscles (which actually didn't feel all that bad.  Plus I got home with 7 miles under my belt for the day.  That's 100 miles dead on for January.

I'm sure it's probably not the same thing as doing those 7 miles in a single run, but at the moment I'm just loading mileage and, to be honest, my muscles are telling me to take it easy anyway.  Two 3 mile runs in a day is taking it easier than one 7 mile run, isn't it?

It's pretty cold tonight and there's the prospect of more snow, but you know what?  I'm thinking of running to work again tomorrow.  My running distance record for a calendar month is 101.6 mile from November last year.  All things being even, I should overtake that somewhere down the Victoria Embankment.  Jantastic have awarded me a badge as one of the most consistent scorers in my local area (whatever that means).  If they knew me better, I'm not sure they would have let me enter in the first place....

As Nigel Tufnel and David St Hubbins of Spinal Tap once said, it such a fine line between stupid and, uh... clever.
Posted by swisslet at 21:12