Today, someone in all seriousness explained to me why the project to merge two teams together was called “Project Windsor”. Apparently it’s because the love of Edward VIII and Wallis Simpson was so great that they were able to overcome all obstacles and opposition that was preventing them from being together, and this project was just like that. Well, what the person actually said to me was something like:

“I’ve just been in this incredibly boring meeting where some bloke explained how the project to bring our teams together was called Windsor because of the love of two people or something. I’ve no idea what he was talking about”
“Windsor? You mean Edward VIII and Wallis Simpson? The Duke and Duchess of Windsor”
“Yeah. That was them”
“And he was using them as a good example of love conquering all?”
“Apparently”
“I suppose that’s one way of looking at it. Don’t most people think they were pretty unpleasant people and Nazi sympathisers?” 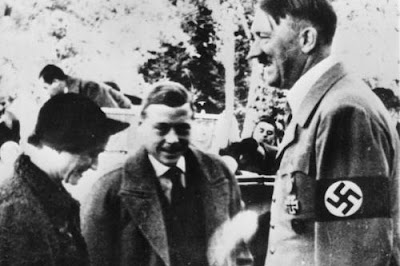 Seems a bit of a strange example to me. Of all the star-crossed lovers you could have picked through all of history and literature, and you chose those two?  I suppose at least one person in the world has seen that apparently godawful Madonna film about them then, eh?

People are weird. I bet he’s probably seen that Diana film too.  Hell, even "Wessex" would probably be a better choice: the untold love story of Edward and Sophie.  No?  You're not buying that?  It would make an amazing film.  Especially that bit where he tells his dad he's leaving the marines to set up a theatrical production company.

(My wife - who is kind of a big deal and knows this sort of stuff - tells me that project names should be picked at random from the dictionary and have absolutely nothing to do with the thing you’re working on, no matter how obliquely. For that reason, I’m code-naming this post “Project Insulsity”)
Posted by swisslet at 19:45