just litter on the breeze....

At the risk of sounding like a grumpy old man, one of the things that makes me most angry is when I cycle down the Victoria Embankment by the river Trent on my way to work and see all the litter left lying around there. This is a pleasant curve of quiet road that has the river on one side and a park on the other side. It has an adventure playground, a café and a paddling pool. It’s used for various festivals and fairs over the course of the year, and it’s a pretty nice public space (I use it every Wednesday for interval training, and I've probably run the loop around here more than anywhere else in the world).

..At least it would be nice if people didn’t park up their cars here to eat their drive-thru takeaways and then dump their rubbish out of their car windows. There are bins all the way down this road, but many people simply can’t be arsed and just toss their trash and drive off. As I cycle past it all, often within a few metres of a rubbish bin, it makes me so cross.

Things like this make my father-in-law cross too, and back in the day, if he saw someone dropping litter, he would pick it up and tap them on the shoulder with an “Excuse me, you’ve dropped something”. Apparently, most people were so shocked by this that they just meekly take the rubbish without a word. To be honest, I’d be worried that if you tried something like that now, the best you could hope for is to be jeered at, and the worst would probably be a smack in the face.

What’s wrong with people? Is it that they’re expecting someone else to pick it up, or that they genuinely don’t care what happens to it once they’ve discarded it? Apparently, the Highways Agency cleans up more than 180,000 sacks of litter from motorways and 'A' roads every year. Fly-tipping on land owned by Network Rail costs around £2.3 million a year to clean up and local authorities in England spend close to a billion pounds a year picking up litter. A billion pounds! To put that money into context, that money could fund 38,633 social care workers, pay the running costs of 4,400 libraries, or pay for 33,200 additional nurses (although, presumably if they did, the litter pickers would be out of work... so it's swings and roundabouts, eh?)

With Glastonbury in a couple of weeks, and before we make any social judgments about the kind of person who might dump their McDonalds drive through rubbish out of the window of their parked car, it’s probably also worth remembering that this is something that also blights something that generally prides itself on being a really green festival (and which generally has a very middle-class clientele, many of whom wouldn't dream of eating anything that came from a drive-thru). 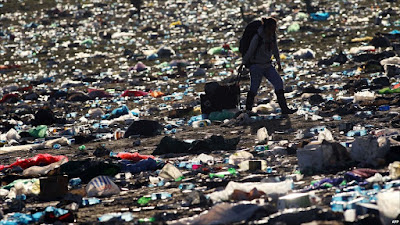 Festival goers at Glastonbury are constantly exhorted to “love the farm, leave no trace” and there’s a real focus on sustainability, with Green Police around to make sure you don't pee in the hedges and upset the water table. They're trying to eliminate plastic bottles from the site, and even the cutlery you get from the food outlets is made of wood rather than plastic. Clearly, the festival isn’t populated by the hippies of legend any more (far from it, it’s practically part of the social circuit now). Every year we go sees people embracing more and more culture of disposability: everything is so cheap, so why would you bother to bring it home? People dump their tents, their bags, their wellies, their clothes… pretty much anything you can think of… because they just can’t be arsed to take it home and have the hassle of washing it; it was cheap enough that they just leave it on the farm.

You can see this in the litter: there are (beautifully painted) bins everywhere, but even before the weekend has really started, the whole site is swimming in litter. Apparently, every single thing, down to the last butt end, is picked up before the cows are allowed back out onto their pasture, but some 2000 tonnes of rubbish are left behind when the festival-goers leave the site: condoms, beer cans, nitrous oxide canisters… you name it. In 2009, about 400 gazebos, 9,500 roll mats, 5,500 tents, 6,500 sleeping bags, 3,500 airbeds and 2,200 chairs were abandoned. 9,500 roll mats out of a total of around 135,000 people at the festival is a pretty damn big percentage of people leaving that stuff behind, wouldn't you say?  It makes for a sad and depressing sight on a Monday morning as you hike out to your car, That's for sure.  But, to be honest, wading through all that rubbish is depressing long before then too.

And don't get me started on all those plastic bottles that covered those remote Pacific desert islands in The Island with Bear Grylls either.... horrifying.

Ugh.  We don't deserve this planet.

I also found out today that our national forum reps at work, the guys who are elected in to represent employees across the country in front of the executive, decided to use their time with the leaders of the business to moan about the people who cycle to work.  Yes, because it's the bike users who cause all the damn problems in the business.  I'm sure that they're somehow responsible for the full car-parks, the congestion in and out of site and probably for global warming too.  It's because of the people who don't drive to work that car drivers are having to pay a bigger share of the workplace parking levy too.......  Honestly.  Really?  REALLY?  AND they sacked Jeremy Clarkson too.  Poor, persecuted lambs.  It must be very hard.
Posted by swisslet at 22:30