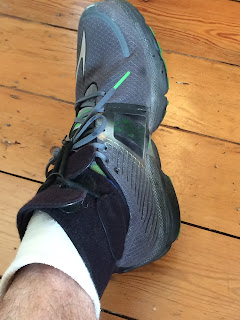 You'll probably remember that I wear an ankle cuff when I run to try and prevent my ankle dropping.  This is mostly to stop me from scuffing my foot when I get tired, which has the immediate effect of sometimes making me fall spectacularly over, but has a rather more insidious knock-on effect on my foot, knees and hips.

On the whole it works pretty well, but I have had to make a few adjustments. 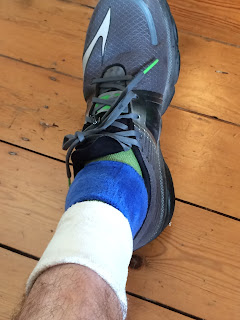 As you can see, underneath the ankle brace itself, I wear two separate sweatbands.  There's a two-fold reason for this.  The cuff itself acts as an anchor for an elastic strap which stretches down and attaches to a hook that I insert underneath the laces in my running shoe.  The stretched elastic flexes as I flex my ankle as I run, but it provides an extra spring to help the ankle fully flex back in my stride, rather than hanging back and dragging on the floor.  As I discovered in marathon training, this transfers force into my ankle and shin, and after long runs, I often end up with a big, swollen bruise.  I combat this by wearing a sweatband on the affected area.  It seems to work,

The second sweatband forms a more obvious purpose, and it's one that I discovered I needed the hard way: 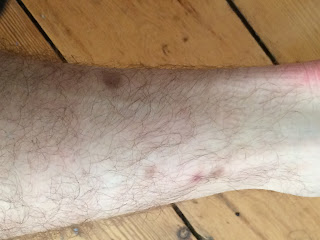 As I run, the ankle cuff chafes.  Because I'm a runner, and because runners learn to ignore pain, this meant that I was often making bloody great big holes in my leg.  I now have a selection of interesting scars around my left ankle, but I also now wear a second sweatband to try and prevent from getting any more.

Does the whole damn contraption work?  Yeah, I reckon.  I've been falling over a lot less, anyway.

I went out for a ten mile run yesterday.  It was pretty hot, but for the first 4 miles, I was holding a pretty reasonable pace..... and then my body blew up, and I started getting slower and slower as fatigue gripped me across the shoulders and my body screamed at me to stop running.  I completed the full ten miles, obviously.  It wasn't much fun, and I slept most of the afternoon and had an early night, but I finished the run.  This evening's 7 miler was a little easier.

Grittily determined  / stubborn past the point of stupidity.... I'll let you decide.  Probably both.
Posted by swisslet at 20:16