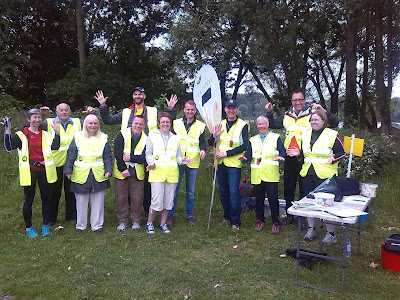 I’m tail running at Colwick parkrun tomorrow. I haven’t done this particular volunteer role before, but it seems fairly straightforward: you sweep up behind the last runner in the field and make sure no one is left behind.

If the first over the line will take around 16 minutes, I’m expecting to cross the line in about 50 minutes. Comfortably a personal worst for the 5km, but it matters not a jot. I’ve done a few volunteer roles at parkrun now: barcode scanning, timing and acting as guide runner for Terry, and all have been pretty good fun (guiding Terry and tailrunning also have the added bonus of counting as a run and adding to my growing tally of parkruns as I head towards my first milestone t-shirt).  It seems that I'm becoming the kind of person who volunteers.

Someone asked me the other week if I was worried that these volunteer roles were affecting my average time (which is apparently available on my parkrun profile). Um. No. I’m interested in my PB and trying to lower it, but even that’s not really all that important in the grand scheme of things. Over the last few months, I’ve got a great deal more satisfaction from running with my wife or from the volunteering roles. The time really doesn’t matter much at all.

The Colwick parkrun core team run an interval session on the Victoria Embankment every Wednesday evening over summer. We essentially run round a coned out track until we feel sick, with the overall aim of improving our time over 5km. It’s hard work, but it’s really good fun too (well, "fun" might be stretching it a bit....). The organisers run the event completely free out of a love for the sport and a desire to help other people improve. When I first started going, I hadn’t actually done a parkrun at all, and after a few weeks of attendance felt slightly sheepish and made my way to Colwick Park on a Saturday morning because I kind of felt that I owed them for all the work they put in.

32 parkruns later, the vast majority of them at Colwick, and I now seem to be a regular member of their pool of volunteers. Without volunteers giving up their time on a Saturday morning, parkrun will die. They’re a great bunch of guys and it’s a really valuable and valued part of my running routine now, so I’m more than happy to help out where I can. As a result of this, together with my running club, I now seem to know an awful lot of runners in Nottingham. C. was very surprised the other week to be cheered across the finish line at Rushcliffe parkrun by name by a person she had never met before. I knew him through running and he therefore knew who she was. This demonstrates, so she tells me, that my social capital is high. Whatever that means.  She also tells me that this means her Facebook feed is clogged with people posting stuff about running.

Chatting to Helen, one of the Colwick parkrun core team, as we walked back to the start of the track for another interval on Wednesday evening, she mentioned that one of the reasons that they started running the sessions on a Wednesday evening was to increase their engagement with the local running community and to hook people in as regular volunteers. Two more parkruns opened in the Nottingham area in the last couple of weeks, meaning that we now have a really high density, with no fewer than 6 in the immediate locale. Each one that opens takes a few runners from the others in the area.  This is usually a good thing, because it keeps the numbers manageable.  Colwick gets about 170-200 every week, but has peaked at over 300.  Each new parkrun also drags away volunteers though, so it's more important than ever to make connections with people who might volunteer.

So you started these interval sessions to attract new volunteers? Well, that totally worked for me, eh?
Posted by swisslet at 20:34

Email ThisBlogThis!Share to TwitterShare to FacebookShare to Pinterest
Labels: exercise as therapy, people, we do not talk about running club