just call on me, brother...

Over the last few months, I've been doing a bit of guide running at Colwick parkrun.  I meet up with Terry, pull on a fluorescent bib saying "guide runner" and then talk him around parkrun.  It's pretty easy really: Terry knows the course so well that it's really just a question of letting him know where other people are and guiding him around corners and changes in terrain.  He's a lovely guy and great company, so it's barely any bother at all. 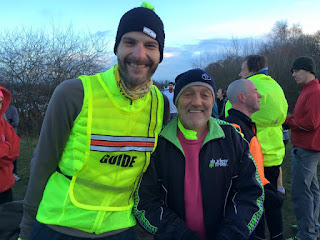 In fact, I've enjoyed it so much that, when the opportunity arose to do a session earlier this week with England Athletics on guide running, I jumped at the chance.  EA are naturally keen to get people more active, and are specifically interested in helping people with disabilities enjoy the benefits of regular exercise.  Clearly, one of the biggest barriers to visually impaired runners is finding someone willing and skilled enough to guide them.  The aim of the session was to introduce potential guides to the various types of visual impairment and to introduce us to guiding.  We got to try on various goggles that show the different types of impairment, we watched a video on guiding and had a good discussion on that with a blind runner and his guide who are working up towards the London Marathon next year.  Best of all, we had a practical session where we got to play the part of both visually impaired runner and guide.  Now, clearly I've guided before.... but I quickly discovered that pulling on a blindfold and putting yourself entirely into the hands of a guide runner is something quite different.

It's frankly terrifying until you learn to trust your guide and to understand how you like to be guided: how short a rope you like; what kind of feedback you need to feel comfortable... that kind of thing.  As a guide runner, experiencing being guided myself also taught me a huge amount about how I could give better guidance.

All in all, it was a fascinating, worthwhile experience and I've signed up to have my name put down into a database of guide runners maintained by British Blind Sport.  There's been a massive increase in people of all sorts taking up running recently, from C25K programmes and parkruns all the way up to participation in longer races.  Apparently, the visually impaired community is no different, but the barriers to getting started are much higher because people don't know how they go about finding a guide to work with them.  Hopefully, pulling together this database will help to change all that.

Running has made a massive difference to my life and the way I feel about myself.  Maybe there's a visually impaired person around here who is just looking for the right guide to get out and change their lives for the better.  Just maybe that person is me.

I'm available for all distances up to marathon at a variety of possible paces.  Also weddings, bar mitzvahs, funerals....
Posted by swisslet at 19:48

Email ThisBlogThis!Share to TwitterShare to FacebookShare to Pinterest
Labels: exercise as therapy, worthiness