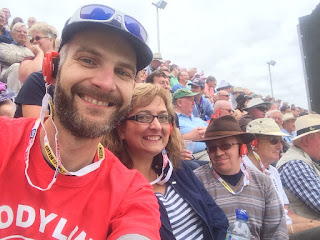 As usual, I spent a few days last week watching the cricket. As a member at Trent Bridge, I had secured tickets for all of the scheduled five days of the Test match against Australia, and was very much looking forward to a few days watching the cricket unfold before me in one of my favourite places in the world with some of my closest friends (and my father-in-law, who loves cricket and with whom I am delighted to spend a couple of days at the match).

It didn’t quite work out like that: after a record-breaking first day on Thursday that saw the Australians bowled out for 60 well before lunch, the match was over after 40 minutes of play on Saturday morning and with nearly three full days left to play. The result meant that England regained the Ashes, and it was a truly extraordinary performance, so it’s pretty hard to complain, even if it meant that I watched significantly less cricket than I had expected.

I’ve watched a lot of cricket at Trent Bridge over the years, but this match was by some distance the most extraordinary, with Thursday’s play in particular being one for the record books. 5 wickets down in the first 25 balls… and the sight of Stuart Broad roaring in to bowl on the first morning of the match with six slips and a short leg. 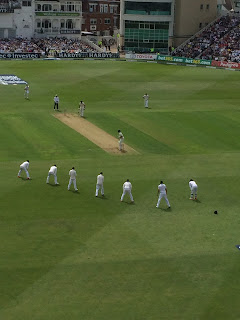 It was a good day to be in your seat for the first over of the morning, anyway.  Ten years ago, in this same fixture, Andrew Strauss took one of the great slip catches.... and I was at the bar and have never been allowed to forget it, reminded each time the catch appears on the television - which is more often than you might think.  Ben Stokes took perhaps its equal when he flew impossibly through the air at fifth slip to catch Adam Voges.  I damn well saw that one.

I’ve seen Australia retain the Ashes at Trent Bridge no fewer than three times; I’ve seen Shane Warne dancing on the pavilion roof with a stump on two occasions. Although I’ve seen England win Ashes tests here twice (2005 and 2013, both times in dramatic circumstances), England have never before clinched the Ashes at Trent Bridge in the whole history of the game. I might have been robbed of a couple of days drinking in the sun with my friends, but I did watch history being made. 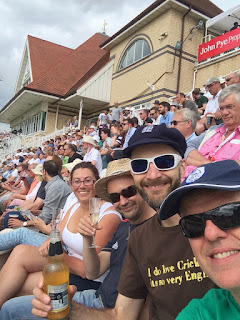 Here are a few of the records from the match (borrowed from here):

Chris Rogers’ maiden duck: Rogers fell for a duck, the first of his Test career, in the third ball of the Test.

Stuart Broad’s 300th Test wicket: The wicket of Rogers was Broad’s 300th wicket in his 83rd Test. He became the fifth Englishman and 29th player to take 300 Test wickets. He also became the second Englishman after Ian Botham (and the 13th cricketer) to the 2000 runs-300 double. Of Englishmen, Broad took most Test matches to reach the 300-wicket landmark. The others to have achieved this are Anderson, Botham, Bob Willis and Fred Trueman.

Both Aussie openers getting out for ducks: This was something rare for Australia. Having produced quality opening batsmen in recent years, it was the first such instance for Australia in this century. The last such occasion was in 1999 at Kandy against Sri Lanka when Michael Slater and Greg Blewett both scored ducks. The last in an Ashes Test was way back in 1950 at The Brisbane where the openers were Jack Moroney and Arthur Morris.

Steven Smith’s single-digit score run: Smith had scored 7 and 8 at Edgbaston, and was out for 6 in the first innings at Trent Bridge. This was the first time he got out in single digits in more than two consecutive innings in 32 Tests and 61 innings. To make matter worse, he was out for 5 in the second innings.

Stuart Broad’s five wickets in 19 balls: Broad dismissed Rogers, Smith, Shaun Marsh, Adam Voges and Michael Clarke in his first 19 balls (3.1 overs). This is the joint- fewest number of balls to take five wickets from the start of an innings. He equalled the record of Ernie Toshack who did the same against India at The Gabba in 1947.

111 balls and all out: Australia’s first innings lasted just 111 balls (18.3 overs). It is the shortest completed first innings of a Test. The previous shortest was also by Australia (113 balls) when they were all out for 53 against England at Lord’s in 1896.

All out before lunch on first day of a Test: Australian batsmen could aggregate just 60 and were all out about ten overs before lunch on Day One. This was the only the fourth instance of a team getting all out in the first session of a Test. The previous instances were Australia (53) against England at Lord’s in 1896; India (76) against South Africa at Motera in 2008; and New Zealand (45) against South Africa at Newlands in 2012-13.

Extras (14) being the highest score for Australia: Only two Australians could get to double digits in the first innings — Clarke (10) and Mitchell Johnson (13), but England conceded 14 extras. This was the first instance in The Ashes and 16th time overall in a completed innings. The last such instance was for England against West Indies at Sabina Park in 2004 where extras (60) beat the highest-scoring batsmen Mark Butcher and Nasser Hussain. Both scored 58.

Records related to Stuart Broad’s 8 for 15:

They are the best figures before lunch on Day One of a Test surpassing Graham McKenzie’s 6 for 34 against India at MCG in 1967-68.

These are the best figures at Trent Bridge in Tests eclipsing Muttiah Muralitharan’s 8 for 70 against England in 2006. The previous best by an English bowler at the venue was 8 for 107 by Bernard Bosanquet in Ashes 1905.

This is the first instance of a bowler taken eight or more wickets and all wickets were caught at slips but none by the wicketkeeper. James White also took eight wicket all caught without involving a wicketkeeper, but one of his wickets was a caught and bowled at Adelaide Oval in Ashes 1929-30.

Ian Bell’s dismissal on 1: Bell was out for 1 for the 12th time in Tests. Among proper batsmen this is the most number of times a batsman has got out for 1. He went past Sachin Tendulkar and Rod Marsh, who had got out on one 11 times in their careers. Of all players Anderson (14 times) and Harbhajan Singh (13) are the only players who have got this more times than Bell.

Joe Root’s century batting in the second innings on Day One: By the end of Day One, Root had completed his century and was unbeaten on 124. He managed to score a century on the first day of a Test despite batting second. This is only the fifth instance of a batsman doing the same. Alviro Peterson (103*) for South Africa against New Zealand at Newlands in 2012-13 was the last to do so after New Zealand were bowled out for 45. Root’s 124* is also the second-highest score in the second innings of a Test on Day One. The highest is 151 by Marcus Trescothick against Bangaldesh at Chester-le-Street in 2005.

Both openers scoring ducks in first innings and 50 in the second: Rogers and David Warner were both out for ducks in the first innings and scored half-centuries in the second. Interestingly, it is only the third such instance in history. The last two were for India (Devang Gandhi and Sadagoppan Ramesh) against New Zealand at Mohali in 1999-00 and for New Zealand (Martin Guptill and Tom Latham) against England at Lord’s in 2015.

Four six-wicket hauls by different bowlers from the same team in four consecutive test innings: Anderson (6 for 47) and Steven Finn (6 for 79) took six-fors at Edgbaston. Broad (8 for 15) and Stokes (6 for 36) did the same at Trent Bridge. This is the first occasion for any team that four different bowlers took six or more wickets in consecutive innings.

Alastair Cook becomes first Englishman to appear in 50 Test wins: The win by an innings and 78 runs is the 50th win for England involving Cook. He became the first English player to reach this feat; 27 others have achieved this for other teams. The next best for England is Anderson with 49. If he hadn’t been absent, he also would have completed this milestone.

100th innings victory: England became the first team to win 100 Tests by an innings. This was England’s 961st Test. They have won 344, lost 278 and drawn 339 matches. Australia is next with 85 innings victories.

7th Test defeat for Michael Clarke as captain in The Ashes: Clarke became the Australian captain with most defeats in Ashes Tests. He surpassed Billy Murdoch, Bill Woodfull, Allan Border and Ricky Ponting, all of whom had six defeats in Ashes under their leadership.

32nd Ashes series win for England: With this win, England regained the urn. Now both Australia and England have won 32 Ashes apiece, while five series were drawn of the 69 played so far.

Cricket's a fascinating sport, isn't it?

All this and we left the ground on Saturday with enough time to get up to Hillsborough to watch Sheffield Wednesday’s first game of the season against Bristol City. Good times! (£42 worth of good times, if you can believe that for game of Championship football.  That incredible first day at Trent Bridge cost me £85 and seems much the better value, to be honest).

Email ThisBlogThis!Share to TwitterShare to FacebookShare to Pinterest
Labels: cricket, friendship, more important than that