I’ve taken a dislike to the man who has the locker next to mine in the changing rooms at work (this is, by the way, the celebrity section of the locker room: Craig Davids and Richard Curtis are both located here). This might seem unreasonable, given that we haven’t exchanged a single word in the year since he moved in, but to my mind, it’s completely justified.

Let me put forward the case for the prosecution:

- He wears full lycra and cleats for his commute. To be fair to him, I have no idea how far he cycles every morning. Maybe it’s miles and miles and this is by far the most practical gear for his journey…. but this brings me to point 2

- He usually doesn’t shower. He comes in, wipes himself down and gets changed into his work gear… in spite of the fact that we have perfectly good showers in the changing rooms and he keeps a towel here. I put it to you that, if he doesn’t cycle hard enough to need a shower, then he definitely doesn’t need to wear full lycra and cleats. You can’t have it both ways 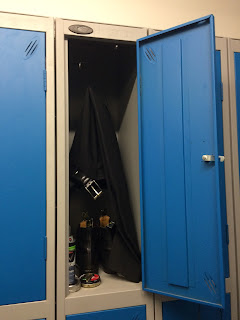 My locker, this evening.  His locker is behind the open door... but it's okay: he'd already gone.

- He’s very possessive of the space around his locker. If my locker door is open when he arrives, even if it isn’t open to the point where it’s over the front of his locker, he pushes it shut. If I have a towel or something hanging in the door of my locker on a hanger, he will move it so it’s hooked up and away from being anywhere near his locker. I wouldn’t mind this so much, except that he doesn’t mind hanging stuff over his own locker and apparently doesn’t see the contradiction

- I don’t like his face. Well, not his actual face as much as the picture on the ID card that’s on the front of every locker. Well, alright, I’m not a massive fan of his actual face either – he seems a bit humourless to me – but his picture is even worse, and I see it every single day even if he’s not actually in the locker room getting changed.

I know I sometimes come across here as excessively stoical and generally seem to possess an aura a little like a modern-day Buddha, but as you can see, I’m actually fairly petty and childish.