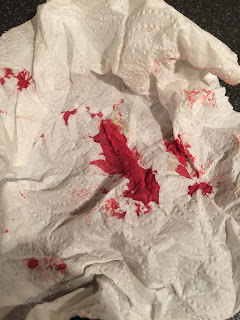 I injected myself for the first time on a Tuesday afternoon in front of an MS nurse in the Queens Medical Centre at the very end of May 2009, shortly after my diagnosis with multiple sclerosis.  It was a Tuesday because that happened to be the day of my appointment with the nurse.  Pretty much every Tuesday night since then, starting on Tuesday 2nd June 2009, I've injected myself into the thigh muscle with Avonex beta-interferon 1a.  Occasionally I'll shift the day around by 24 hours or so, depending on what's happening and if I need to catch a flight or something and it saves me carrying needles onto a plane.  Mostly though, I inject on a Tuesday night.  I've never forgotten and never missed a week.

Sometimes it hurts.  Sometimes it bleeds.  Occasionally it spurts and very occasionally it gushes.  The needle is a couple of inches long and you have to give it a bit of a run-up to get it into your thigh.  It's certainly no good trying to ease it in.  If you're unlucky, you hit a nerve and jerk the needle straight out of your leg as the muscle twitches, forcing you to start all over again.

Mostly, I inject at home in the kitchen, but I have injected in all sorts of places around the world, including in a campervan parked under the stars on the Great Ocean Road in Australia and outside a tent in Etosha National Park in Namibia.  I often take syringes and needles through security in airports because you can't leave them to travel in the hold in case they freeze, but the only place that I've ever been stopped was by Chinese customs in Hong Kong.  Even then, one look at a doctor's letter and they waved me through.

The routine is mostly the same: I prefer to inject in the evening so as to sleep through the worst of any side-effects.  I take 1000mg of paracetamol and 400mg of ibuprofen and just get on with it.  Some people are so badly affected by side-effects that they stop taking the drug entirely, preferring to take their chances without it.  The worst I get is a headache and a lingering feeling of weakness for the next 24 hours or so.  I often wake up on a Wednesday morning feeling as though I am being gently, but definitely pushed back into the mattress.  It can be a bit of a struggle to get going, but I've never been totally unable to get started in the end.  It might take a minute or so longer, but I seem to shake it off soon enough.

I have blood tests every six months to make sure that the drug isn't having any lingering impact on my liver function.  So far, so good.  I tolerate it well enough, so although there are other therapies available on the market, including some oral treatments, my neurologist has never considered moving me onto something else.

No one has any idea if injecting myself with this drug has made any difference to the progression of my MS.  It's not a cure, and all it claims to do is to maybe increase the gap between relapses, slowing the progression of the disease and therefore slowing the advance of any disability.  I'm doing pretty well, but is this down to the drug or is this the way it was always going to be?  No one knows and there's no way of saying either way.  My view is that I would always rather do something that might be helping than to do nothing, which definitely isn't.

It is what it is.  It's what I do on a Tuesday night and to some extent my life revolves around my weekly injection.