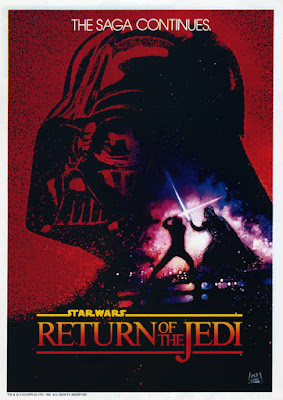 Over the weekend, I took the time to watch the classic Star Wars trilogy again.

I’ve seen all of these films literally hundreds of times over the years, so this wasn’t so much a question of preparing myself for the release of the new film in December as much as the fact that I just thought I was due. When I watch these films, I can remember where the original boxing day adverts were in the version we taped off the telly and onto Betamax; I can remember Luke throwing his grapple on the Death Star and missing the first time; I can remember queuing in the rain outside the Elektra cinema in Newport Pagnell to watch the Empire Strikes Back for the first time; I can remember playing with my Star Wars figures and counting down the days to the release of the Return of the Jedi. I’ve owned these films many times and in several different formats, from that original Betamax copy of Star Wars taped off the telly, through various video box-sets (the one of the original cuts I left with an ex-girlfriend, which seems ridiculously generous of me, given that now it’s basically the special editions or bust), and finally onto DVD. I drew the line at buying the Blu-Rays because I figured that, by this point, I’d given George Lucas more than enough of my money. I’d love to get the original cuts again, but the crappy edits available on the Blu-Ray just wasn’t enough to entice me.

When I went to the cinema in 1997 to watch the Special Editions, I was a little surprised that Return of the Jedi was the film that I actually enjoyed the most. Like most fan-boys, I’m an ESB man, and had a healthy loathing of the damn ewoks… but when it actually came to watching the films again on the big screen, it was Jedi that grabbed me the most. Perhaps it was because it was the one of the films that I’d watched the least, but there it was. The same thing happened again this weekend: there’s something satisfying about the way it rounds off the whole journey with the death of the Emperor and the destruction of the second Death Star. Maybe I’ve mellowed, but I don’t even really mind the ewoks anymore either.

A couple of things did strike me about the films though: the first was that almost every single addition that George Lucas made in the Special Editions was a complete waste of time. Either they added nothing at all to the plot (that extra scene with Biggs before the assault on the Death Star – yes, they had the footage, but all it does is slow down the story and shows us how crap an actor Red Leader is), or they just looked hideously dated. Never mind the fact that it’s all a bit childish, all that additional CGI to beef out Mos Eisley just looks like it has been pasted onto the original film and doesn’t look real. Why squeeze Jabba in? It doesn’t make any sense and the logistical problem of having Han walking around him could just have been avoided by leaving the scene out in the first place. It’s tinkering for tinkering’s sake, and shows again that George Lucas didn’t really understand what made Star Wars so charming in the first place. We like Han Solo precisely because he is the kind of scoundrel who would shoot someone under the table. Still George Lucas was only insisting last week that he hoped that JJ Abrams didn’t “ruin” his vision and that Jar-Jar Binks remained his favourite character in the whole saga. Trolling Star Wars fans to the end….

The other thing that struck me was quite how much of the thunder of the original trilogy that the prequels take away. One of my friends has never seen any of the Star Wars films before, and so her boyfriend is preparing her for the release of “The Force Awakens” in December by watching the films in order of Episode I to Episode VI. That seems like it makes sense, but when you think about it… it really doesn’t. Think of the dramatic tension we get from finding out that Darth Vader is Luke’s father. If you watch the prequels first, that tension is completely ruined. And… of course, they’re crap films. If my friend can make it to Episode IV after watching all six hours of that crap – never having been interested enough to watch any of them before, remember – then she’s probably doing pretty well. We took part in a Star Wars quiz the other week, and the quizmaster was talking about something we should watch out for the next time we watched The Revenge of the Sith. I snorted. I’m never bloody watching that again, I thought.  It's better than the other two, but really that's not saying much.

At the end of the day, the original films are just great entertainment. Several times, my wife passed by as I was watching them, and several times she found herself sitting down to watch as she got sucked in. It was a pleasure to watch them again, having not watched them for a few years. Even if I have seen them all hundreds of times over the years. I’m a fan, but I’m not one of those people who is so excited about Episode VII that I’ve booked my tickets already. I remember getting excited about seeing Darth Maul on the first Phantom Menace trailer, and look how that turned out. I’m hopeful that it will be a decent, entertaining film… but I think I’m past the point where I’m expecting it to really rock my world….. although I will admit that when Han and Chewie turned up in the trailer, my heart did skip a beat. Those cynical, manipulative bastards.

There will be more exciting Star Wars news here very soon. To misquote Lando, I’ve just made a deal that will help us with our marathon fund for the MS Trust enormously. Watch this space for a running / Star Wars based announcement that you will all be able to get involved here in the next couple of weeks….. For reals.
Posted by swisslet at 20:57

Email ThisBlogThis!Share to TwitterShare to FacebookShare to Pinterest
Labels: film, old school, we do not talk about running club