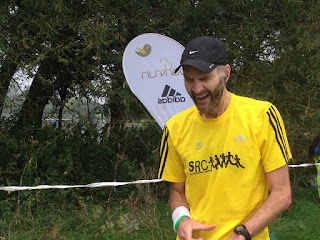 At some point earlier this month, I ran my 1000th mile of the calendar year. It’s a new personal best, easily surpassing the 800 or-so miles that I ran last year. With six weeks to go before the end of the year, it was quickly noted and then left behind as the apparently endless accumulation of miles continued. I’m currently running about 20 miles a week, 80 miles a month. That’s some way down from my pre-London Marathon peak of 169 miles in March, but training for the 2016 marathon hasn’t really begun in earnest yet. The milestones keep coming too: I’m due to run my 50th parkrun on 19th December, having only run my first on 23rd August 2014, also volunteering some 13 times in that time.

All of this points to someone who is a keen runner…. which I am. What that doesn’t tell you is the physical impact this is having on my body. I have spasms in my legs where my thigh and calf muscles twitch uncontrollably; I regularly wake in the night as my calf muscles cramp (I take magnesium supplements and drink tonic water to try and manage this); my left ankle has swollen and I have lost a significant amount of dorsiflexion in the joint; when I get up in the morning or after sitting for some time behind my desk at work, my hips and legs are so stiff that I walk around the place like an old man; scuffing my left foot and collapsing my left knee inwards as I run has had a knock-on physical effect on my plantar fascia, my knee and my hip. I have also now lost something like 10% of the muscle mass on the left side of my body.

Some of these things are down to the progression of my multiple sclerosis. Some of them can probably be more easily explained by the fact that I’m a 41 year-old man with a few miles on the clock and a frame that isn’t really built for running.

I’m not telling you this because I’m looking for sympathy. Running is an enormously important part of my physical and mental wellbeing and something would have to go very wrong indeed before I will stop dragging myself out through the door. I run because I want to run, because I enjoy running and the way it makes me feel; I run because I really enjoy the company of the other runners at my local parkrun and at my running club.

I know that some runners are motivated by the bling they get for completing a race, but for me the medal is one of the least important aspects of a run, and I certainly don’t expect a medal just for lacing up my trainers and heading out on a cold, wet night in November.

Apart from total indifference, I think I get two different kinds of responses to the information that I have completed a marathon and will be running another one next year: lots of people, perhaps not fully understanding MS or the massive range of possible outcomes, think it’s extraordinary. MS can put you in a wheelchair, can’t it? Running 26.2 miles is a massive achievement. Well, yes it is... but that's true for anyone.  The other response I get is from people who do have MS, who sometimes dismiss me as a freak case who somehow gives people the wrong impression of what it’s *really* like to have MS. There are always people like you, they say, climbing mountains or running marathons, when the rest of us can barely get out of the front door.

I try not to think about either reaction very deeply, to be honest. I don’t think of myself as especially remarkable in any regard. I have a compulsion to run and so I run. It’s not always easy, but it’s not really easy for anyone, whatever their physical condition. That first step out of the door is hard for everyone, especially on a pissy, cold night in November.

Besides, what’s the alternative?  I’m certainly not planning on stopping anytime soon.
Posted by swisslet at 22:07