a million shards of glass...

We watched “Spectre” yesterday, and I have to say that I enjoyed it. No spoilers here, btw. 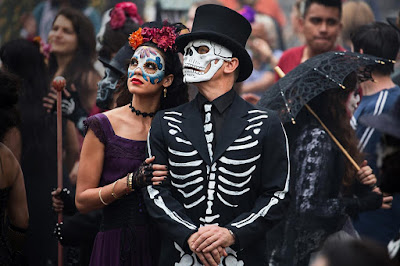 Yes, it’s manifestly ridiculous and I’m certain the plot doesn’t stand up to any kind of scrutiny… but it was a lot of fun, right from the stylish opening sequence set in Mexico City during the Day of the Dead. (sidebar: I read an interesting discussion about cultural appropriation and the day of the dead here)

I was speaking to a friend yesterday who was saying how Daniel Craig was his least favourite of all of the actors to have played Bond. I couldn’t disagree more: I’m starting to think that he might well be the best, although this film feels like a natural full-stop for his time in the role.  Ian Fleming apparently approved of the casting of Sean Connery because of the way that he walked like a panther, full of controlled menace. Watching Daniel Craig as he walked along the edge of a hotel balcony in Mexico and stepped down air-conditioning units and across the gaps between buildings, the very same thought struck me too… he walks like a panther, full of grace and threat.

He’s a physically impressive specimen (at the age of 47, poor old boy), but he’s also managed to capture a tender side to 007 that we haven't seen in the past. This was apparent in his very first outing, in Casino Royale, when he comforted Vesper in the shower, and you can see it here when, at a crucial moment, he holds a woman’s hand because she is scared. The Daniel Craig era has seen a significant move away from the misogynism that was part-and-parcel of the Bond film canon. Women are not just objects in these films, and they are not just victims either.  Daniel Craig's Bond is often surrounded by powerful and empowered women, most notably (but not exclusively) Judi Dench's M. At a couple of key moments in this film, it is the woman who is making the decisions about their relationship and not Bond.  It's not really what you could exactly call a subtle film, but it has some nice touches amid all the crash, bang, wallop. 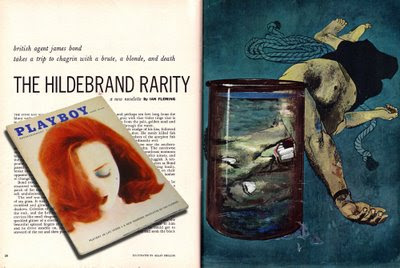 One thing I particularly enjoyed in Spectre was the referencing of older Bond tropes: some were more obvious than others (I won't mention the most obvious, but the mountain-top retreat was a nice touch, although sadly no skiing away from black-suited bad guys with guns).  The one that made me laugh out loud was a beautifully subtle reference to a Fleming short story in the "For Your Eyes Only" collection.  If you haven't read "The Hildebrand Rarity", then I highly recommend it.  In fact, I would recommend any of the Bond short stories.  "Quantum of Solace" (from the same collection) is definitely worth a read and is absolutely nothing like the film.  Nothing.  For starters, it's a story told *to* Bond and doesn't feature 007 at all.  "Octopussy" is a corker too.

I enjoyed all the books.  They're products of their time, for sure, and you find yourself wincing at some of it (negroes can't whistle?  What? But they're really very good.  If I was a film producer, I'd be looking at making a proper period Bond that faithfully follows the books. "Moonraker" would be my choice.  Again -- notice the theme? -- that book's nothing much like the film either.

So Spectre: yes. Well, I can take or leave the theme song.... but apart from that, I enjoyed it.  If you can find a cinema showing it, then you should check it out.
Posted by swisslet at 21:53