don't need no key to unlock this door... 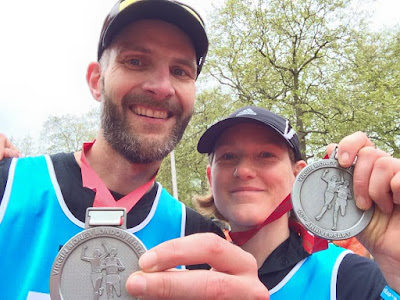 Well, that's it then: we're committed to running the 2016 London Marathon.

Six months ago, we ran the famous 26.2 mile course from Blackheath to the Mall in a shade under 5 hours.  In six months time, we'll be doing exactly the same thing again.  If ever you needed proof that the human body has a capacity to forget pain, then this is surely it.

The training programme doesn't really start for another couple of months, but you and I both know that training doesn't really stop around here.  Last time around it was a huge challenge and a step into the unknown to see if my body could withstand that sort of mileage.... not just in the run itself, but in the hours and hours of training you do just to be ready on the start line.  I've run 937 miles this year so far, and it's no coincidence at all that 166.9 of them came in March in the month before the marathon itself.  I've lost muscle mass on my left side, and I don't pick my left foot up properly when I get tired because of the loss of strength and a loss of flexibility in my ankle.  I was worried that I might break myself.  That I didn't was in no small part down to the fact that I did the vast majority of those miles in the company of my wife, running at a pace that was slower than I might have liked, but that without a shadow of a doubt helped me through.

But you know what?  I knew almost as soon as we crossed the finishing line together that I was going to run this race again.  You know what else? I also knew that I wanted to do it on my own.  I'm pretty sure that I'm not going to challenge 4 hours, because I really think my body will break.... I reckon I've got a 1:45 half marathon in me, but this is an entirely different kettle of fish.  4.5 hours is a lot more realistic a target, but to be honest, I don't want to set a target at all; I just want the mental and physical challenge of a marathon on my own.  I'll almost certainly go faster than I did the first time, but I'm not going to set myself any targets beyond that.  C. is running again too, and will face the challenge of getting herself around the course on her own with her usual determination.  Of that I have absolutely no doubt.

We're raising money for the MS Trust again for 2016.  We raised £7,200 last time around, and since then I've been lucky enough to get a lot closer to the work that this wonderful charity does.  They may not be as big as some other charities, but they punch well above their weight and play a vital role in both providing support and information for people who are diagnosed with MS and in supporting and educating the MS professionals.  I was lucky enough to be invited to a reception for the MS Trust at the House of Lords a few weeks ago, and a very eminent neurologist gave a talk there saying how much he valued and appreciated the work that the Trust does.

I'll try not to go about it too much, but I have set up a fundraising page:

As running is about to take up an even greater proportion of my life than it already does, what I can't guarantee is that I won't blather on about the training all the time on here.  Sorry about that, but it's just the way life is going to be for the next six months.

Anyone else feel tired just thinking about that?
Posted by swisslet at 21:38

Email ThisBlogThis!Share to TwitterShare to FacebookShare to Pinterest
Labels: crazy in the coconut, exercise as therapy, more important than that, MS Trust