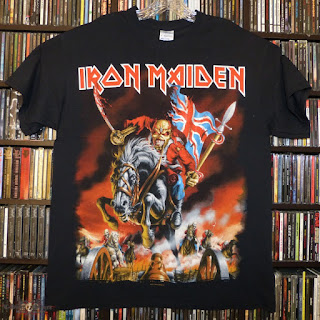 It's the BBC's "Wear your old band t-shirt to work day" today.  Which, let's be honest, is surely something we'd all rather get behind than Black Friday, right?  Sadly, as I work for a retailer, I spent most of my day in a shirt and tie helping customers in one of our shops.  That doesn't mean that old band t-shirts haven't been on my mind today.

I love t-shirts and have many, but my days of buying a t-shirt at a gig are mostly (but not completely) behind me.  I used to have load of old, faded band t-shirts, many that I'd picked up on my way out of a sweaty rock gig.  Most of them came from my heavy metal years, so they were of course EPIC.  I've had t-shirts by the likes of Iron Maiden, Little Angels, Thunder, Aerosmith,  I honestly think that one of my favourite t-shirts of all time was a Wolsbane fan club t-shirt with a wolf on the front and "Howling Mad Shithead" (the name of the fanclub) proudly displayed on the back.

If I could find one today, I reckon I'd buy it again.  I really would.

Funnily enough, I think the last t-shirt that I actually bought at a gig was an Iron Maiden t-shirt that I bought after their "Maiden England" set at Download a couple of years ago.  Well, unless you count to the "Glastallica" t-shirt that I bought after Metallica's set at Glastonbury in 2014.  Yeah, there a lot of really good heavy metal t-shirts.  In fact, of the band t-shirts that I do still have, many of them are from bands like Led Zeppelin, Metallica and Maiden.  I guess I'm pretty old school.

So, because it's "wear your old band t-shirt to work" day and because I haven't been able to wear a t-shirt to work, here's a salute to the band t-shirts that I have loved and sometimes lost along the way: the "William it was Really Nothing" t-shirt, "Love in an Elevator", that Led Zeppelin 1977 tour t-shirt, Billy Bragg's "Milkman of Human Kindness", a classic red Ramones t-shirt (and the Daily Mash spoof of it in blue), the "Alive" stick man by Pearl Jam, the cover image from Scott Walker's  Scott 1 that I loved so much that I made into a t-shirt myself, "The Number of the Beast", "Master of Puppets".... honestly too many to mention, and I've loved them all.

They're a badge of honour that shows the world what you're about and you wear because you love the music and you want the world to know... well, that's how you should be wearing a band t-shirt, anyway.

I wish I'd hung onto them all because they tell a story of my life.

What's your favourite?
Posted by swisslet at 19:01