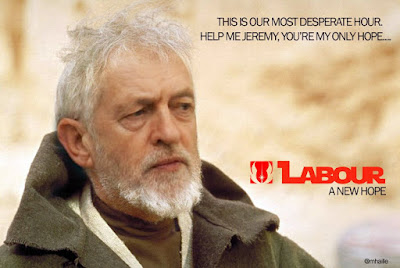 If you can step away from all the hysteria of the British media coverage -- including, sad to say, the Guardian and the BBC - then is Jeremy Corbyn actually saying anything particularly controversial on this subject?

Here's his statement, made after David Cameron made the case of airstrikes last week:

“The Prime Minister made a Statement to the House today making the case for a UK bombing campaign against ISIS in Syria. A copy of my response has already been circulated.We have all been horrified by the despicable attacks in Paris and are determined to see the defeat of ISIS.

“Our first priority must be the security of Britain and the safety of the British people. The issue now is whether what the Prime Minister is proposing strengthens, or undermines, our national security.

“I do not believe that the Prime Minister today made a convincing case that extending UK bombing to Syria would meet that crucial test. Nor did it satisfactorily answer the questions raised by us and the Foreign Affairs Select Committee.

“In particular, the Prime Minister did not set out a coherent strategy, coordinated through the United Nations, for the defeat of ISIS. Nor has he been able to explain what credible and acceptable ground forces could retake and hold territory freed from ISIS control by an intensified air campaign.

“In my view, the Prime Minister has been unable to explain the contribution of additional UK bombing to a comprehensive negotiated political settlement of the Syrian civil war, or its likely impact on the threat of terrorist attacks in the UK.

“For these and other reasons, I do not believe the Prime Minister’s current proposal for air strikes in Syria will protect our security and therefore cannot support it."

Which part of that seems radical or unreasonable to you?

We've been down this road before, time and time again, and where has it got us?  Well.... it's got us to here.

Whilst it might be understandable for Francois Hollande to be talking of wiping the evil of ISIS from the face of the planet, I've yet to hear him explain in any detail how he plans to do this beyond throwing ordinance onto the ground indiscriminately.  I don't think there's anyone who really thinks that airstrikes are the answer, particularly not when many of the terrorists attacking us are citizens of our own countries.  How does bombing Syria address that problem? How is it not like lopping one head off the hydra only for two more to spring up in their place?

Jeremy Corbyn has come under an extraordinary amount of flak for all sorts of things since he became leader of the Labour party: not singing the national anthem, not bowing low enough at the Cenotaph on Remembrance Sunday, wearing a shell suit.... but I can't be the only one who finds it refreshing that we have someone in politics who has principles and is prepared to stick by them under sometimes intolerable seeming pressure, much of it from his own party. 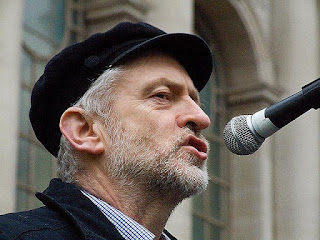 Exactly what do you find in his statements on Syria that you find so disagreeable? Or perhaps you think David Cameron really has presented a compelling case.....?

You also have to admire the fact that he doesn't fall into the trap of all-too-many politicians in talking about European deaths as though they are somehow worth more than other deaths. It took a brave man to criticise the lack of media focus on the bombings in Beirut that killed at least 40 people the day before 129 people died in the Paris attacks. “Our media needs to be able to report things that happen outside Europe as well as inside Europe. A life is a life,” Surely it's hard to disagree with that?

When Corbyn declared that Britain ‘must not be drawn into responses that feed the cycle of violence and hate’, he really did sound like Obi Wan Kenobi too.

Don't get sucked into the media narrative: use your own ears and your own judgement.
Posted by swisslet at 20:32