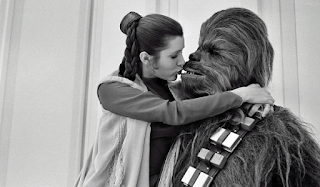 There's an article on the Guardian today where Carrie Fisher discusses how she felt under pressure to lose 35lbs before they started filming the new Star Wars film.  This is a difficult issue: would there be a problem if a Princess Leia, 38 years older than in the original films, was two-and-a-half stone heavier than when she was nineteen?  Probably not.  She isn't, after all, very likely to be required to appear in a metal bikini this time around.

But do the director and producers have a right to ask the actors to change their body shape if they feel it is right for the character?  It would definitely be a problem if only the female actors were asked to lose weight, but it's noticeable that Mark Hamill lost a lot of weight before filming too.  Although the role Luke Skywalker is going to play in this film is shrouded in mystery, I suppose it's safe to say that a fat Jedi Master was never really going to work...

Anyway.  Whilst reading this article, I discovered that a Guardian commentator by the name of Nashket has won the Internet for the day with this pearler of a comment:

"Spoke like somebody who does not have a clue about Star Wars.
Princess Leia, the character, is an elegant individual who takes massive pride in her appearance, after all she is royalty and had a privileged upbringing.
She is also son of Anakin Skywalker, one of the most powerful Jedi ever known based on his Midi-Chlorian level and therefore has great discipline and self-respect for the body which is passed down to her by her as a result of her Jedi roots in her character.
She would not of suddenly just abandoned all those personality traits as she got older or developed a cake addiction, when cake may not even exist in the Star wars universe.
I have not seen Star Wars in about 10 years and I remember these basic things.
When political correctness starts to cause you to change some of the greatest stories ever told, you know something is not correct"

....Although, as another commentator notes a little further down, "No cake in the Star Wars universe?! Then just what are the rebel alliance fighting for?!!"

I actually want to try and avoid spoilers for this film.  I sense that this may be difficult, especially as I won't be seeing it for a week or so after it's released.  Oh well.  I guess I'll live.
Posted by swisslet at 18:19

Email ThisBlogThis!Share to TwitterShare to FacebookShare to Pinterest
Labels: film, other people, random