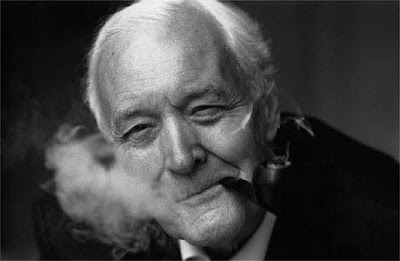 With his son about to vote in favour of bombing Syria, now seems like a good time to remind ourselves of a couple of quotes by the late Tony Benn.

"I was born about a quarter of a mile from where we are sitting now and I was here in London during the Blitz. And every night I went down into the shelter. 500 people killed, my brother was killed, my friends were killed. And when the Charter of the UN was read to me, I was a pilot coming home in a troop ship: ‘We the peoples of the United Nations determined to save succeeding generations from the scourge of war, which twice in our lifetime has brought untold sorrow to mankind.’ That was the pledge my generation gave to the younger generation and you tore it up. And it’s a war crime that’s been committed in Iraq, because there is no moral difference between a stealth bomber and a suicide bomber. Both kill innocent people for political reasons."

I was lucky enough to seem him speak a few times at Glastonbury, and he was an inspiration.

I don't actually bear any ill-will towards Hilary Benn: he's entitled to his own sincerely-held views and I think that Corbyn is right to allow the members of the Parliamentary Labour Party to vote with their consciences on this issue.  What I do take issue with is when the Prime Minster of this country calls the people holding a different view to his own "terrorist sympathisers".  He's refused to apologise for the remark too, and he's demeaning the office he holds with every day he continues to hold it.

Did you see that some of the bombs we might well drop onto Syria cost nearly £800,000 each, not counting the cost of getting them them to the Middle East and then into the air on a Tornado? The cost of just one of those Storm Shadow missiles would apparently provide temporary accommodation over Christmas for all of London's rough sleepers.

"According to a Ministry of Defence report to Parliament in 2010, each Tornado flight costs £35,000 per hour. Typically, two Tornados fly each mission, lasting anywhere between four and eight hours. So let's land somewhere in the middle: a six-hour mission costs a basic £210,000. Then we have to consider the cost of the missiles. The expected payload would be four Paveway bombs, £22,000 each, and two Brimstone missiles, £105,000 per unit. So let's say that's £508,000 per aircraft in total, just a smidgen over £1m per mission. If they carry Storm Shadows at £800,000 a pop, then the cost rises considerably...."

This is austerity Britain, remember.