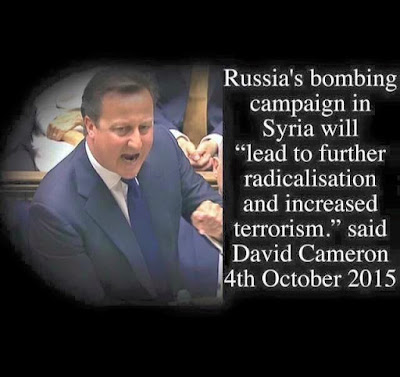 I saw this today and rolled my eyes.  You couldn't make this stuff up.  You absolutely believe that David Cameron is the kind of politician who, within the space of two months, could complete such a massive turnaround to the extent that he was now leading his own bombing campaign in Syria and calling the people who opposed him in Parliament as "terrorist sympathisers".

But, much though I want to believe that's true because it suits my narrative... I also studied history and I needed whether he really said that or not.

"Tragically, what has happened is that most of the Russian air strikes, as far as we have been able to see so far, have been in parts of Syria not controlled by Isil (IS) but controlled by other opponents to the regime.  So what is happening is that they are backing the butcher Assad, which is a terrible mistake for them and for the world; it's going to make the region more unstable, it will lead to further radicalisation and increased terrorism. And I would say to them: change direction, join us in attacking Isil but recognise that if we want to have a secure region, we need an alternative leader to Assad. He can't unite the Syrian people."

Here's the report in the BBC.

Context is everything: although he used those exact words, they are framed in a statement that is actually pretty consistent with what he was saying in Parliament yesterday.

I dislike David Cameron.  His repeated refusal to apologise for his remarks on Jeremy Corbyn as a "terrorist sympathiser" yesterday added insult to injury and further demeaned his office.  I fundamentally disagree that we have anything like a compelling case for airstrikes on Syria, and I find it insulting that Cameron thinks he can dupe us into thinking that somehow these bombings will make us safer.  These attacks surely increase the likelihood of an attack on British soil and they will certainly lead to more death and suffering and desperate refugees clamouring to escape our bombs every bit as much as they are trying to escape from Daesh.

But is it helpful to make a poster that obscures the truth?  No.  There are many good arguments against the bombings and we should use them and keep protesting the decision rather than just making stuff up to deliberately mislead people.  That's called propaganda and we're better than that.  Leave that to the other side.

"He who asks a question is a fool for five minutes; he who does not ask a question remains a fool forever." [the internet seems to assume this is a chinese proverb, but I've also seen it attributed to Mark Twain, so.... you can't be too careful, eh?]
Posted by swisslet at 21:10

Email ThisBlogThis!Share to TwitterShare to FacebookShare to Pinterest
Labels: history and stuff, insightful political analysis, trust me I'm an historian