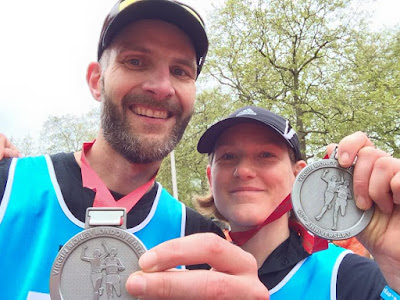 So that’s another year done, all bar the shouting.

2015 has been a good year for me in lots of different ways. Here’s my year in some randomly assembled numbers:

- About 500 miles of training that culminated in a glorious 26.2 miles through London in April with my wife. An extraordinary experience (and, actually, my only proper PB of the year. 2015 was also the year that I discovered that running is about an awful lot more to me than just running personal bests)

- 1,390-odd miles cycling… none of which I count as exercise because it’s all been my commute

- More than £11,000 raised for the MS Trust in the calendar year. £7,200 for the 2015 marathon, and the rest towards our 2016 target. That seems like a ridiculous number and, although I’m very proud, I’m mostly humbled by the thought that none of it would be possible without the generosity of people like you. You can sponsor us here: http://virginmoneygiving.com/TCMS

- 1500 places on our two Star Wars themed Virtual Runs sold in a matter of hours (there’s still time to enter the Revenge of the Sixth race!)

- Something like 37 parkruns, and another 11 as a volunteer (that's 30 at Colwick, 1 at Long Eaton, 2 in Milton Keynes, I think 2 in Oxford and 1 maybe 2 at Rushcliffe.  I forget.  52 in total, anyway!), including a splendid milestone run at Colwick Park on 19th December at the Xmas jumper run. I love my parkrun community and hope to be taking my first steps into run directing in 2016

- 1 England Athletics course on blind running attended. I’ve had the pleasure of guiding Terry around parkrun 3 or 4 times this year, and in 2016, I’m going to become a fully accredited guide runner. Running is great, but the community I’ve discovered through running – at parkrun and at my running club – has inspired me to try and volunteer and give back as much as I can

- 3 choir seasons, 8 concerts and 1 CD recorded. It’s only been a year since I joined the choir, and already I find it impossible to imagine doing anything else on a Tuesday night. Who knows, I might even audition for a solo spot in 2016. I’ve been eyeing up a couple of possible candidates that seem to be bang in my range (surprisingly, neither is Johnny Cash)

- 52 weekly injections into my thigh

- 1 visit to the MS clinic to see the neurologist, 2 visits to the incontinence clinic and three visits to the gastro-intestinal clinic... culminating in the very good news that I don't have bowel cancer

- 191 blog posts, which a quick scan of the archives shows to be mostly about running. Sorry about that, but it’s likely to be more of the same in 2016 too, I’m afraid….

Here’s to another year.

2015 might have seen my first marathon, but I think 2016 might be the year I get my first custom-made, artisanal pair of lederhosen, so that's something to look forward to already....

Email ThisBlogThis!Share to TwitterShare to FacebookShare to Pinterest
Labels: 2015, another year over