gonna get you, no matter how far... 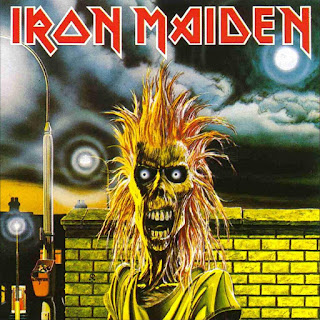 Shamelessly copying Pete from Uborka, I’ve decided to do an album-by-album career retrospective of a band that have remained a musical touchstone in my life. Pete has been working his way through the many and varied back catalogue of David Bowie, but I’m choosing a band who have been ground zero for my musical taste: Iron Maiden. For all their commercial success, Iron Maiden have never exactly been cool, even if you can now find their t-shirts worn by people who wouldn’t dream of listening to their music. Truth be told, it was the album cover that led me to pick up that cassette copy of The Number of the Beast in Our Price in 1987, but it was the music itself that proved to be a turning point in my listening life, moving me away from my juvenilia and opening the door to a much, much wider and more interesting musical world. The only other band that have had anything like the influence that Iron Maiden had on me were The Smiths, but I didn’t discover them until I was nineteen years old and starting at University. Iron Maiden took hold of me when I was thirteen, and I still get a fierce sense of joy today, aged 41, when I listen to their music.

Iron Maiden are very much Steve Harris’ band: formed in 1975 and working their way through a number of experimental line-ups before finally releasing their debut album in April 1980. Only a couple of members of the “classic” Iron Maiden line-up were in place at this time, with the band featuring, as well as Steve Harris on bass and Dave Murray on guitar, Paul Di'Anno on vocals, Dennis Stratton on guitar, and Clive Burr on drums. The band’s mascot, Ed the Head, is also in place on the album cover…. albeit looking a little more intact than in some of his later incarnations. Steve Harris has always reacted angrily to suggestions that the band’s sound has ever been influenced by punk, but you only have to listen to the moment when Di’Anno’s vocals kick in on opening track, “Prowler”, to realise that Harris is fooling no-one and the influence of punk is writ large across much of this album. Mostly this is because of Di’Anno’s growly, throaty vocal style, but there’s also a raw-ness to the band themselves that makes the comparison impossible to avoid. It’s true that Bruce Dickinson’s operatic foghorn wail and enormous vocal range took the band to another level when he joined for The Number of the Beast, but there’s surely no denying that Di’Anno’s vocals were a large part of Iron Maiden’s early success (and the album charted at #4 in the UK charts, which seems remarkable). Maybe it’s controversial to say so, Bruce Dickinson is clearly the better singer with a much bigger range, but Di’Anno’s singing here on songs like “Running Free” and “Iron Maiden” has never been matched or bettered by Dickinson, even though both songs remain in the live set-list for almost every gig. For all the punky influences, there are also hints of the band’s future direction in songs like “The Phantom of the Opera”, with its sprawling arrangement and duelling guitars (that will forever, in my head at least, conjure up images of Daley Thompson in that brilliant Lucozade advert).

Listening back to the album now, what strikes me the most is quite how good it is: the band had been honing their craft for five years by the time they released this record, and although they apparently aren’t happy with the production on the album, it still sounds pretty good to me. Raw, maybe, but that suits the songs (follow-up album "Killers" actually suffers from having more of a production sheen on it, in my opinion). In fact, I don’t think there can be many records that are 36 years old and still sound this fresh. Maybe the band doesn’t sound entirely like classic Maiden yet (mostly because it doesn’t feature Bruce Dickinson), but it’s barely dated. This incarnation of Maiden are some way from the finished product, which was probably still three or four years away at this point, but they are edgy and exciting and clearly on the cusp of something big.  As a sure sign of how much I like this album, I even really like the instrumental piece, "Transylvania" too.  Without Di'Anno singing - the single biggest factor in the band sounding so different - it actually sounds a lot more like the Iron Maiden we've come to know and love over the years, albeit a punkier version. Steve Harris once said that "I think if anyone wants to understand Maiden's early thing, in particular the harmony guitars, all they have to do is listen to Wishbone Ash's Argus album. Thin Lizzy too, but not as much. And then we wanted to have a bit of a prog thing thrown in as well, because I was really into bands like Genesis and Jethro Tull. So you combine all that with the heavy riffs and the speed, and you've got it". Hmm.  Maybe that's true, but I think the punk is in there whether he likes to admit it or not, even without Di'Anno's vocal style.

One of the most interesting things about Iron Maiden over the years has been the sheer breadth and variety of their lyrics. I’m sure that, in most people’s heads, they sing about nothing much more than war and the devil… which is probably an easy assumption to make given the subject matter some of their most famous songs (“Aces High”, “The Trooper”, “The Number of the Beast” to name three). Actually, they are incredibly varied: myths (“Flight of Icarus”), ancient Egypt (“Powerslave”), poetry (“The Rime of the Ancient Mariner”), Nightmares (“Fear of the Dark”)… etc. etc. The lyrics on their debut are somewhat cruder: “Prowler” is a great song to open the record, but there’s no getting away from the fact that it’s about a stalker and “Charlotte the Harlot” isn’t exactly at the forefront of feminist thinking. Some of the slower songs are good, but perhaps a bit cheesy and derivative (“Remember Tomorrow” sounds a bit like Thin Lizzy, and “Strange World” sounds a lot like a re-heated version of “Remember Tomorrow”), but at least the band are trying to mix it up a little bit.

Best Song: Phantom of the Opera. Not for nothing do they still play this one at most of their gigs. It’s the best signpost here of the direction the band are heading.
Biggest Surprise: I’d forgotten how good Sanctuary sounds
Weakest Song: I’m not a big fan of “Strange World”, but even though they’ve revisited her in four subsequent songs, the lyrics to “Charlotte the Harlot” just make me wince
Ed the Head looks…..: …. Like a zombie punk. Just don’t tell Steve Harris that I said that.
Three word review: Raw, vibrant, fresh.

This should be an interesting journey: with the release of this year's "The Book of Souls", Iron Maiden now have 16 studio albums.  Many of them I know extremely well from my youth, but I essentially stopped buying new Iron Maiden records when Fear of the Dark was released in 1992.  I'm looking forward to this, although it may take me a while.
Posted by swisslet at 18:43