hang some tinsel on that evergreen bough....

On Tuesday evening, I took part in a singing Christmas Tree. 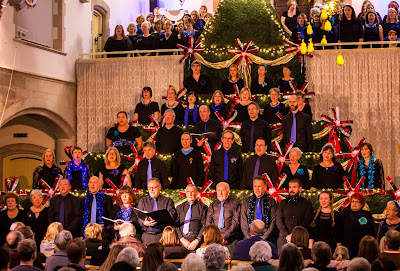 We’ve been learning the winter season at choir now for something approaching 3 months, but it’s not really accurate to call our weekly sessions “rehearsals”, because that implies that the end goal is the end-of-season concerts. The concerts certainly provide some focus – we’re singing to 800 people in Nottingham’s Albert Hall on Sunday evening – but I think the simple act of singing in a choir for a couple of hours each week is a thing worth celebrating in its own right. It’s definitely more than just practice for the big concerts.

The singing Christmas Tree was part of a series of events laid on this week by the West Bridgford Methodist church to support some of their charities. Although we sing in this church every week, we’ve not actually practiced with the choir in this arrangement, and it was very strange to find myself singing and not to be able to hear any other basses. In some of the songs that I know really well, all I could hear was other voice parts, and I started to wonder if I was singing the wrong bits. It was my first concert of the season, and we were far from perfect on the night, but I’m pretty sure we got away with it. One more concert tonight and then the next stop is the Albert Hall.

As an atheist, you wouldn’t think that churches are really my natural habitat, nor would you imagine that I would enjoy singing songs about God (we’re not a religious choir, but at this time of the year, it sort of goes with the territory). Well, I’ve always loved cathedrals as beautiful buildings in their own right, and it's possible to enjoy that and even to appreciate the devotion that built them without buying into anything else.  And actually I’m able to switch off the part of my brain that finds this God stuff daft, and just enjoy these songs as beautiful songs (there was an especially lovely ensemble piece on Tuesday of "The Angel Gabriel").  Some of them are a bit grovelly, it must be said, which wouldn’t be to my taste if I was the Creator, but I'm not, so there you go.  Perhaps he likes that sort of stuff (although I suspect it says an awful lot more about the songwriters than it does their God).

My friend Tony took some pictures of me as we were singing “Little Donkey”. We don’t do much choreography – lucky for me – but we did have to do a little bit of gazing up in wonder during this song during the “ring out those bells tonight” bit. As has been pointed out, I look as though I’m not so much looking up in wonder as staring at an incoming comet. Or, as I suggested, I’ve realised that a lifetime of atheism is coming home to roost, and that I’m standing in a church and about to burst into flames. 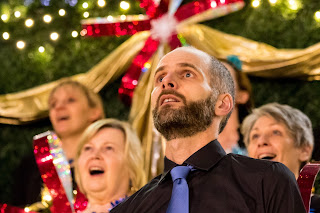 Email ThisBlogThis!Share to TwitterShare to FacebookShare to Pinterest
Labels: choir, compliments of the season