So, I was all ready to announce to you that the Virtual Run to raise money for our London Marathon fund for the MS Trust went live today.... 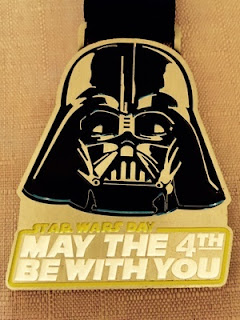 In case you're not familiar with Virtual Runner, this is a brilliantly simple idea that allows people to enter "races" of varying distances (5km, 10km etc.etc) and then run them in their own time, receiving a medal once they have finished.  Lots of people are intimidated by big, formal race meets, and this enables them to take part as a member of a vibrant virtual community of runners.  The real beauty of this is that it's a not-for-profit thing, and the proceeds for each race go directly to a number of very worthy causes.  Since starting, a little over 2 years ago, they have raised over £50,000 in total now, and are regularly in the top 1% of donors on JustGiving.  It's very impressive.

Lucky for me, Susan - the founder of the site - is a member of my running club, and she has been good enough to find room on their schedule for a race to support our fundraising for the MS Trust.  It's an "any distance" event, due to take place on May 4th... and just take a look at that medal!  My friend Claire, who is also in our running club, has her birthday on May 4th and asked me what I thought of the idea of a Star Wars run as a theme.  Needless to say, I thought it was a brilliant idea, timed to perfection with the release of the new film (these things don't happen by accident, you know).

I was all set to make the big announcement here and to encourage you all to enter.... but the race completely sold out all 500 places in the first two hours of being open to the general public.  It's humbling.  Of course, most of these people are excited about Star Wars, but I'm happy to say that my friends and colleagues have also been really keen to take part because they want to do something to help us to support this fantastic charity.  It's all very humbling.

Don't worry though: Susan is sourcing more medals as we speak, and hopefully we'll have loads more places to sell in the very near future.  After all, who wouldn't want that medal?  Obviously, from my point of view, the more runners we can get signed up, the better (it's open to international runners too, incidentally).  This goes straight onto my fundraising page for the London Marathon and will go from there directly to the MS Trust.  It's all win for me!  I'll let you know when more places are up for grabs.

Expect invitations to a medal-packing party at some point in early May!
Posted by swisslet at 17:07

Email ThisBlogThis!Share to TwitterShare to FacebookShare to Pinterest
Labels: exercise as therapy, MS Trust, we do not talk about running club, worthiness