you’re the first and last of your kind... 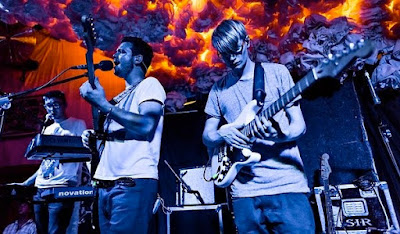 As I’ve said many times before, I’m not the biggest fan of Nottingham Arena. Well, actually I suppose the arena itself is fine, and from an abstract point of view it’s handy to have a venue like this so close to home… it’s just that it’s a fairly rubbish place to watch a band. It’s a combination of factors really: it’s not very nice standing in a massive barn with lots of people who seem only passingly interested in a band who sound crap anyway. I’ve seen a few bands here over the years, and there’s only been one act who have been able to overcome the dodgy sound. As that was Metallica, I like to think that it’s because they are simply loud enough to blast their way through such things. Still, if a band I want to see announces they’re playing there, then the choice is simple: if I want to see them, then I have just put up with it. Including the £7.50 booking fee. Bloody thieves.

My main order of business was to miss the backing band. I took an instant dlslike to the Horrors when I first read about them. It was a dislike that deepened when I actually heard them and had my suspicions confirmed that they were a bunch of chancers who hung around in the right places and didn’t actually have any musical ideas worth listening to because they were much more interested in how cool they thought they looked. The write-ups for their second album actually tried to convince me that they had come up with some ideas and were now musically interesting. I was sufficiently curious to stick around at the John Peel stage at Glastonbury after a band I really liked to hear what they sounded like. They drew a bit of a crowd, but they were unutterably shite. I’m afraid that Faris Badwan strikes me as a pretentious twat of the highest order, and there was no damn way that I was going to stand in a chilly barnyard of a venue and give those talentless idiots another chance whilst drinking a warm pint of Stella. So I had a nice curry instead and a pint of Santa Paws at Brew Dog, and timed my arrival at the arena nearly to perfection when the main act took to the stage about 5 minutes after we turned up.

Alt-J are a funny sort of band, aren’t they? They sound strange enough to only have a relatively small following, but following the Mercury Prize in 2012, they seem to have become quite big almost by accident. Are Alt-J an arena band? Well, they’ve played Madison Square Garden, so it seems that they absolutely are. They haven’t sold the arena out tonight, and large swathes of the seating areas are actually covered off, but there are still substantially more people here than you could fit into Rock City (capacity 2,100 but a much, much better place to be watching a band you love). It’s a classic arena crowd too: quite mixed with quite a big age-range and nearly as many girls as boys. Many look like they’ve been there since the doors opened and a good few are clutching programmes. Honestly, who buys the programme at a gig? It’s probably unfair of me, but I tend to think of audiences like this at arena gigs as the kind of people who don’t go to gigs very often. I don’t mean to sound like a snob, and it’s not that I go to all that many anymore, but these guys have a real air of “making a night of it”. Naturally, I settle on a spot right behind three guys who then spend all night having a conversation, speaking slightly more loudly when the band inconvenience them by playing their most famous song. I don’t know why these people come to gigs at all, never mind to ones that cost £30-odd. Why don’t you just go to the pub or invite your mates round to yours to listen to the record?

I really like this band. I prefer the first album to the second, but I think they’re really interesting and angular and not at all like the meat-and-two-veg rock offered up by people like Kasabian and Stereophonics. But tonight, there’s something missing. It’s the last night of the tour, and they sound very, very good (even in an arena with people chatting just in front of me)…. But they sound clinical to me. It’s maybe a bit harsh to be criticising a band for sounding like their records, but it makes for a sterile live experience if that’s all we get. They sound good, but there’s very little movement on the stage, and only one member of the band really talks to the audience, and he doesn’t do that very often. It’s bloodless. In some ways, that suits their music…. When they tried to tell me in an interview I read that “Tessellate” was a really sexy song, it’s a bit of a struggle to believe them. I love that song to bits, but sexy it isn’t. They also pace their set badly – at least for me – with a definite sag towards the end and even a massive change of pace in the encore. They sound efficient, but I’m looking for something a little more from my live experience. Maybe the venue doesn’t suit them: an arena like this needs a band with a real force of personality to punch through the smothering sterility of the environment around them. Alt-J, for all that they are an excellent, interesting band, just don’t have that. At least not yet. Not that they should feel too sad about that: one of the worst gigs I’ve ever seen here was a disinterested Radiohead touring “Hail to the Thief”. They’re an interesting band too, but they were shocking that night and it nearly put me off going to see them live ever again. Alt-J weren’t that bad, and I’d probably see them again (definitely if they’re playing Glastonbury and I’m not doing anything else, anyway!) but I came away thinking that I might have been better served staying in Brew Dog for another pint of Santa Paws and then putting the record on when I got home.

Disappointing, even if the band themselves sounded great. They’ve got some great songs too.