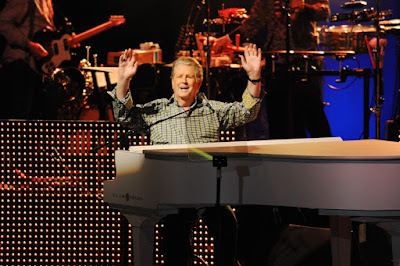 I saw Brian Wilson performing in the “legends” slot at Glastonbury in 2005. It had been a wet year, but the sun came out and the site dried up in time for everyone to put their sunglasses on and listen to a dose of pure Californian sunshine. Wilson sometimes didn’t look much like he knew what was going on, waving his hands about behind the piano rather than actually playing, but his band were great and, when you’ve got a back catalogue that good, frankly what does it matter. He even played “Little Saint Nick”.

I turned down the chance to see him performing Pet Sounds in Nottingham a decade ago because it just seemed so expensive, but after ten more years of growing appreciation of the size of the man’s talent, I wasn’t about to miss out again this time around. Not least because this is apparently the last time he will be performing “Pet Sounds” in full, and because it might well be the 73 year old’s last tour full stop.

It’s only a few months since I saw “Love & Mercy”, the film of Wilson’s life starring Paul Dano as a young Brian and John Cusack as the older version. Perhaps unexpectedly, it’s brilliant: not only are we reminded of the genius of Wilson’s songwriting, but we also see the toll that trying to catch the lightning of his inspiration on tape ultimately took on his life. Dano is outstanding, but Cusack – who doesn’t much look like Brian Wilson at all – really captures the shuffling man that we see onstage tonight.

It’s hard to know how much Wilson really takes in. Does he know what city he’s in? Is he really all that aware of what’s going on around him? A couple of times in the set, he basically just stands up and shuffles off-stage as songs are still finishing. His mental health problems are well-documented, and he cuts a frail, sometimes distracted figure on the stage. At 73-years old, he also needs quite a lot of help from his band to pull off those beautiful songs: there are sometimes 11 musicians onstage here, with instruments ranging from the theramin, flute, vibes, saxophone, bongos all the way back to three guitars, two drummers and a bassist. They sound great… when they launch into the introduction to “California Girls” early in the set, it’s almost impossible not to be transported back to a more innocent time. Original Beach Boy, Al Jardine is there, but perhaps the most important member of the backing band is Al’s son Matt, who handles all of the higher vocals with confidence and with a beautifully strong and clear falsetto. “Don’t Worry Baby” in particular is a delight, but he seamlessly picks up those notes that Wilson himself used to sing but can no longer reach. Wilson’s voice is still good: it wobbles around a bit, but then he’ll suddenly take you by surprise with the power and clarity of his vocal. 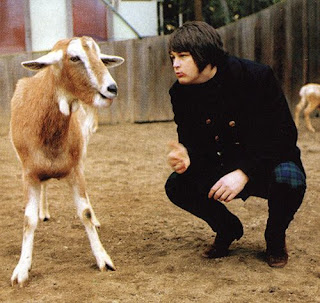 But it’s those songs…. Ah. I can’t hear early Beach Boys music without almost being moved to tears by the beauty and the innocence. Better than almost any other songwriter, Wilson has an uncanny knack of transporting me back to a more innocent time. His songs are guileless and naive in the most charming way. In many ways, the progression from those early surf hits to those more fragile and delicate songs on “Pet Sounds” mirrors both Wilson’s development as a songwriter and his own apparent inability to deal with the complexities of the modern world. If there’s a more beautiful song than “God Only Knows”, then I’m not sure I’ve heard it, and it predictably brings the tears to my eyes when the band play it. That on its own might be enough, but Brian Wilson has written literally dozens of songs (nearly) as good as that: Good Vibrations, for starters….

The set itself is some two-and-a-half hours long, and could probably do with a bit of trimming. Apart from anything else, I’m mildly confused by the presence of former-Beach Boy and touring member of the Rolling stones, Blondie Chaplain, who appears midset for three songs, disappears and then comes back to shake a tambourine during the encore. To be fair, he’s a compelling stage presence, I just didn’t know why he was there.

All in all? A wonderful evening with some of the most beautiful songs ever written, well-performed and with some added poignancy from the fragile state of Brian Wilson and the fact that I will probably never get to see him perform these songs again.

Pet Sounds
Wouldn't It Be Nice
You Still Believe in Me
That's Not Me
Don't Talk (Put Your Head on My Shoulder)
I'm Waiting for the Day
Let's Go Away for Awhile
Sloop John B
God Only Knows
I Know There's an Answer
Here Today
I Just Wasn't Made for These Times
Pet Sounds
Caroline, No

The way he finished with "Love and Mercy" was just so touching.  He's a gentle soul and he really wasn't made for these times.

I was also, for a change, one of the youngest people in the audience. Now that doesn’t happen very often any more, I can tell you. I was a lot more limber than most of them too... On the way out, we saw the band's tour buses pulling up to take them on the next leg of the tour - they're playing in Barcelona next.  We were delighted to see that the lead bus had a fresh bunch of flowers, a kettle and a toaster.

Well, he's earned them, hasn't he?