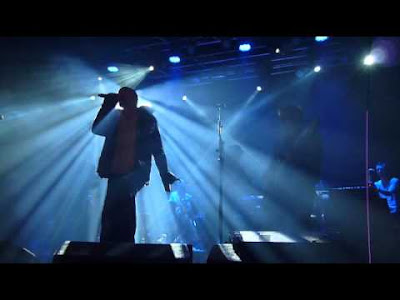 I think I first watched James play live on a Thursday night at Oxford Poly. I’d been working in Wellingborough, drove across to Oxford to the gig and drove home to Nottingham again afterwards. I was knackered and, at one point on the drive home, I had to stop and get some fresh air lest I fell asleep at the wheel. It was totally worth it though: the band were on a high after the success of their "Whiplash" and their Greatest Hits album, and were playing their last warm-up before a big set at Glastonbury the following night. They were electric: so good that Tim Booth actually wondered aloud to the audience whether they should have kept some of their powder dry for the bigger gig on Friday.

I’ve seen them many times since then: at festivals, at Wembley Arena in a sold out Christmas show, playing “Pleased to Meet You” to a half-full Rock City when it looked like the bubble might have burst, and again at a sold out theatre in Oxford when touring their comeback album,“Hey Ma”, some eight years later…. they were the festival openers at Glastonbury this year, too. Slightly delayed by the weather, they were playing to a massive crowd and did that entirely typically James thing of refusing to just perform as the nostalgia act that their sozzled and damp festival audience might well have expected. It’s not that they don’t play their hits, because they do… and they clearly really relished playing the Festival too and were introduced onstage by Michael Eavis himself… it’s just that they don’t always play the hits you might expect to hear, and they will insist on performing songs from their more recent albums.

Here’s the thing though: James might be best known for “Sit Down”, a song they released in 1990 and for albums like “Seven” (1992) and “Laid” (1992), but the very reason that they are still together as a band today is because they have kept creating new material and haven’t just given up and taken the cash that must surely have been on offer to them to be a nostalgia band cranking out songs that are well over 20 years old.

The simple truth is that they are still recording material now that is every bit as good as anything they’ve done. This show is part of the tour for their most recent (excellent) album, this year’s “Girl at the End of the World”, but “La Petite Morte” (2014) is also brilliant and, in “Moving On”, contains a song that I think might just be my favourite of anything they’ve ever recorded. The band took a hiatus after the relatively poor sales of 2001s “Pleased to Meet You”, but since they got back together in 2008, they’ve been absolutely storming it. Interestingly, “Getting Away with It (All Messed Up)” from “Pleased To Meet You” is played early in the set and sounds absolutely brilliant. Still, it always seemed that this band has a special knack of missing out. That massive selling, double-platinum greatest hits was followed by “Millionaires”, which was brilliant but never seemed to get the recognition it deserved at a time when a band of chancers like Oasis were selling absolute tosh (“Be Here Now”)by the truck load.

The band were actually due to play this gig in May, but were forced to cancel because of Tim Booth’s illness. When he takes to the stage tonight, Tim makes a point of telling us how sorry he is to have inconvenienced everyone and that the band felt they owed us… so get ready and settle in, because this was going to be a long one.

Two hours, as it turns out… but in that time, the band manage to work their way through songs from almost every part of their career. They don’t play “Laid” and they don’t play “Sit Down”, but why would anyone care about that when they’re as good as they are tonight? I’ve never heard them play “Just Like Fred Astaire” before, for starters, or “Vervaceous”, and when they play “Sometimes”, the crowd sings the refrain back at them for so long after they’ve finished playing, that they pick their instruments up again and join back in. “You don’t forget these moments”, Booth tells us, when we finally finish the song (which will always remind me of my friend Oliver and the time we spent together studying in Venice).

As I watch the show, I’m struck by what an interesting band they are: they mostly shun rock posturing and lyrical cliché, and are instead something fairly unique. Tim Booth is, of course, a mesmerising front man with his own absolutely unique way of dancing and – tonight, anyway – a magnificent pair of trousers. They’re interesting; upbeat; thoughtful and engaging; they demand your attention and wrestle with the big, unanswerable questions of love and life and death, usually in a questioning and upbeat, optimistic way. I can’t listen to “Moving On” without welling up because it manages to be so upbeat about a topic as potentially grim as death itself. Tim tells us tonight that he wrote this about his experience of watching his mother dying over a couple of days in a hospital bed in Sheffield. Far from being depressing, he told us, it was beautiful and uplifting and a joy to watch because she was in her 90s, had her children around her and was ready to go. Watch the video, and I think you’ll understand exactly what he’s talking about.

It was a Tuesday night and I’m tired and full of cold as I fight off the dog-end of this bronchitis and it’s a band I’ve seen dozens of times before… but it was just what I needed. I’m not sure they actually make bands like this any more, if they ever really did. James are a one-off and we should cherish them.

Setlist: To My Surprise, Waking, Getting Away With It (All Messed Up), Moving On, Five-O, I Wanna Go Home, Interrogation, Move Down South, Tomorrow, Vervaceous, Feet Of Clay, She's a Star, Dear John, Surfer's Song, Curse Curse, Come Home, Attention

Encore: Just Like Fred Astaire, Sometimes, Nothing But Love, Sound
Posted by swisslet at 19:55