you lit a torch in the empty night... 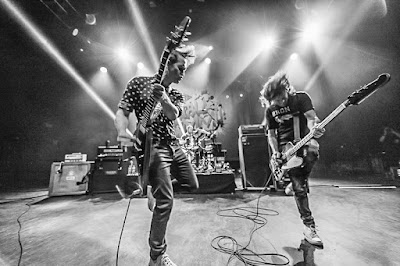 When I bought my copy of Ash’s debut album, 1977, in the glorious early summer of 1996, it came with a promotional frisbee. It was bright green and had the band logo printed on it. As far as I know, it’s still in the TV room of that post-graduate hall of residence in York where I left it. If you had the right kind of CD player – and I did – you could wind back past the beginning of the first track and hear “Jack Names the Planets” and it’s b-side in the pre-gap before the album proper began. You don’t get that kind of thing with an MP3 download, eh? Nevermind a frisbee. The band are the same age as my younger brother and I’d been buying their singles through the last couple of years of my undergraduate degree when they seemed ridiculously young (I’ve still got “Kung Fu”, “Angel Interceptor” and “Girl From Mars” on CD single at home). A couple of years later, in 1999, the “A Life Less Ordinary” soundtrack was one of the first pieces of music that my wife ever bought me (I bought her “Scott Sings Jacques Brel”, because I’m highbrow like that. CULTURAL ELITE, Steve…)

Twenty years later and these kids are now pushing 40 and are taking this classic album out on the road to play it in full. My younger brother spotted the gig in the listings and asked if I minded if he made the trip up from Bristol to watch the gig and to stay the night, and did I fancy coming with him? Of course I did. As well as having the chance to watch a band I’ve enjoyed live many times before, it was a chance to spend some time with my little brother and to off-load all the Christmas presents onto him to take down to our parents and our other brother and his family. At this time of year, that’s ideal. My team at work were out for a meal in town too, so they got the chance to have a look at my brother and for me to buy them all a Christmas pint.

Rock City was what you expect: filled with people about my age. A slightly younger crowd than when I saw Therapy? touring Troublegum a little while back, but not by too much. It wasn’t quite sold out, but seemed full enough and had leaking toilets and crap beer, so it was still the Rock City that we know and love. It’s a great venue to watch a band. 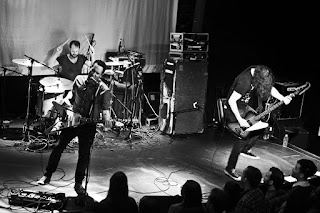 The gig was pretty much what you expect too: the band ripped through 1977 from start to finish without too much messing around and without too much chatter with the audience. They sound good and the majority of the material stands up really well too (they started the set with the sound of a screaming TIE-fighter flyby, obviously). I saw an interview with Tim Wheeler the other day where he was talking about how “Goldfinger” is the song he’s most proud of writing, and that he’s not sure that he would be able to write something as sophisticated as that now, all these years later. It sounds great – and given that he must have written it when he was a teenager, the fact that it still sounds so good is a real tribute to how good a song it is. The singles definitely stand out, but they always did… so it’s hardly surprising when “Girl From Mars” and “Angel Interceptor” bring the house down.

With 1977 out of the way, the band settle in to play us out with a set that is mainly made up of their earlier songs – with a “Life Less Ordinary” sounding as good as it always does. It’s one of those songs that feels loose and lacking in production polish, but Tim Wheeler has such a keen ear for a melody that it just soars. They’re back for an encore, of course, but any encore that includes “Orpheus”, “Shining Light” and “Burn Baby Burn” is just fine with me. They’re three very different songs, but each in their own way showcase Wheeler’s enduring talent. take “Burn Baby Burn”: in the harum-scarum of the guitar riff, it’s perhaps easy to lose sight of just how good those lyrics are:

“Tumbling like the leaves
We are spiralling on the breeze…”

Not for nothing was this the first song ever played on BBC 6 Music.  And “Shining Light” won an Ivor Novello songwriting award, for goodness sake.
As for“Orpheus”… well, that just appeals to the heavy metal fan in me, I think.

They’re a good band. Apparently they’ll be back next year with a new album… nostalgia bands are all very well, but it’s even better if they’re trying to keep pushing forwards creatively*

* the exception to this rule is when Shakin Stevens announced in the middle of his Glastonbury Set that he was going to be playing songs from his new album. There were audible groans. NO Shakey. NO. And he didn’t play Green Door, which must have disappointed the guys who had lugged a full-size wooden door into the festival JUST FOR THAT SONG.