And whisper'd in the sounds of silence... 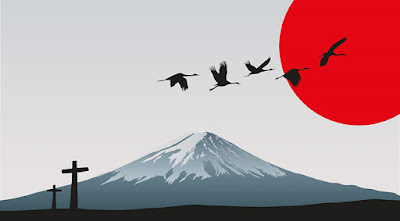 To quote wikipedia, "It is the story of a Jesuit missionary sent to 17th century Japan, who endures persecution in the time of Kakure Kirishitan ("Hidden Christians") that followed the defeat of the Shimabara Rebellion. The recipient of the 1966 Tanizaki Prize, it has been called "Endo's supreme achievement" and "one of the twentieth century's finest novels". Written partly in the form of a letter by its central character, the theme of a silent God who accompanies a believer in adversity was greatly influenced by the Catholic Endō's experience of religious discrimination in Japan, racism in France, and a debilitating bout with tuberculosis."

I studied history at University, and I think the most interesting course I took was called "Europeans in Africa and Asia" and focused mainly on the Christian missions to India, China and Japan.  The Jesuits who founded these missions were the most extraordinary and accomplished men, writing the first dictionaries of these complex languages and finding ways to immerse themselves into the highest society of these strange new lands.  It's a fascinating period of history.

When I saw a trailer for Martin Scorcese's adaptation of "Silence", I was intrigued... but the 160 minute adaptation of a relatively slender book, my bumpy relationship with the work of the director and... let's be honest... the presence of Liam Neeson in the cast rather put me off.  I decided to read the book instead and see how I felt afterwards.

And now that I've read it?

My first thought is that I don't think it's been very sensitively translated.  Clearly, I don't read Japanese, but it just feels too clunky and I can't believe that such a well-regarded and prize-winning book could be so clunky.  I had similar problems with Jose Saramago's "Blindness"... which is apparently brilliant, but I found my translation to be laughably poor and completely obstructive to my enjoyment.

My next thought, I'm afraid, is that the book just doesn't move me. I'm atheist, so perhaps the spiritual anguish the protagonist suffers in the book is never going to touch me the way that it clearly touched the rather more Catholic Scorcese (he says as much in the preface).  I rather think not, though.  I might be atheist, but during my degree, I actively sought out courses on the history of religion: the Dutch rebellion against the Spanish, the French Wars of Religion, the Reformation and the Counter-Reformation.  I don't believe in God, but I'm fascinated by the ideas of people who did and the achievements they made in the name of that belief... just read about the lives of man like Francis Xavier or Matteo Ricci and marvel at the places their faith and their brilliance took them.  I can be moved by these stories... I'm just not moved by this story.  I find the protagonist, Rodrigues (played by Andrew Garfield in the film) to be singularly unsympathetic.  He is driven by his faith in God to seek out his mentor, who has disappeared in Japan and is said to have apostatised.  Whilst there, although Christianity has been outlawed and Christians are persecuted where they are found, he seeks to carry out his mission to the peasant believers that he finds there.  Perhaps this is deliberate (the author is a Japanese Christian himself, after all), but his attitude to these peasants is patronising at best and racist at worst and his 'suffering' for his faith seems to be somewhat superficial and quite some distance from the glorious martyrdom he seems to imagine for himself.

Perhaps I'm misreading and that's the whole point: that all these people suffer and die for nothing but the silence of an uncaring God.... although it's hard to see what Scorcese would like about that.  That kind of cosmic joke would seem more like Richard Dawkins' kind of bag, to be honest.

What I can't escape is that I just found the book boring... slow is one thing, but this novel seems to take an inordinate amount of time taking us nowhere very interesting.  Even the ending - a series of afterwords in the form of letters and diary entries - is dull and anti-climactic.

So, do I fancy going to watch a 160 minute adaptation of this book by a director who -- for me -- often seems to make overly-long and underly-interesting films and has a track record of dwelling on his own faith?

Speaking of highly-rated books that I'm not enjoying, do people honestly find "The Third Policeman" funny? Really?
Posted by swisslet at 22:27