I'm a runner and I do quite a bit of running: more than 1000 miles a year.  That's quite a lot by most people's standards... but just because I run a lot doesn't make me a particularly good  or an especially fast runner.

In fact, I'm not particularly quick at all.

Of course, all of this is relative: for all that I think that my half marathon PB is at least 5-10 minutes slower than it should be and I haven't been near my parkrun PB in nearly two years, there are plenty of people who would love to run as slowly as I think I do.

Truth be told, I don't actually have all that much desire to run much faster and I've never really been one to hunt for PBs.  Apart from anything else, it really hurts to push yourself that much.

So I've started going to a local athletic's club on a Thursday night to do some track sessions. 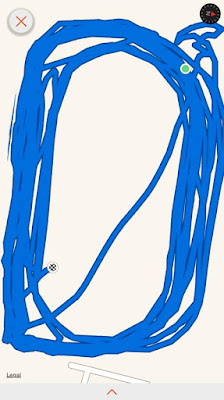 They're a really friendly club, but I'm a pretty long way from being the fastest person there.  In fact, even though there are loads and loads of kids, I think it's fair to say that I'm closer to the back of the pack than I am to the front... and it's really hard bloody work.  The first time I went, we did intervals on the muddy banks around the edge of the track: 1 minute, 2 minutes, 3 minutes, 4 minutes, 5 minutes, 6 minutes, 7 minutes... with a minute's rest between each.  Last night, we did 4x800m and 4/200m parlaufs.

I'm never going to be the quickest and I have very little desire to run competitively, so why on earth am I putting myself through this?  Well, I might not want to get much faster, but I definitely don't want to get any slower either; I want to push myself, to shake myself out of my comfort zone.  I've not had a very good year from a health point of view - in fact, the last twelve months have probably been my worst ever.  This culminated in the chest infection that stopped me running properly for around 5 weeks and for all of December.  I'm not training for a marathon this year, but I'm suddenly feeling vulnerable and all the little niggles caused by my MS and by other things are starting to take their toll.  I've dropped my mileage, happy to be doing any running at all instead of worrying about not doing enough.  I'm running 5km where before I might have run 4 or 5 miles; and I'm dropping my pace too.  Nobody would blame me for any of this.  I've not been very well, I'm 42 years old and I've got multiple sclerosis, for goodness sake.  No one is keeping a scoresheet and laughing at how my physical performance is seemingly falling away. Well, no one outside of my head, anyway.

Well, I'm not having it.

I'm still not really targeting any dramatic improvements and I'm not about to go PB hunting... but I am determined to try and shake off my lethargy and to make this damn body do a bit of honest work.  I will not go gently into that good night, dangnabbit.  I will rage, rage against the dying of the light.  If that means wobbling my way around a running track on a frigid January night being overtaken by precocious eight year olds, then so be it.

....Besides, the coach eyed me up when I arrived, called me a "veteran athlete" (well, I'll take being called an athlete of any sort at this stage of the game) and said I looked like a triathlete. Who wouldn't be happy with that to keep them warm as they huff and puff their way around at the back of the pack of endurance athletes training on the track?

It sounds a bit hardcore to join an athletics club, I know, but I really think I might do it.

Perhaps this is what a midlife crisis looks like?
Posted by swisslet at 21:27

Email ThisBlogThis!Share to TwitterShare to FacebookShare to Pinterest
Labels: exercise as therapy, more important than that, WTs