When he arrived in the office the other day, my boss greeted me warmly.  After exchanging pleasantries about our respective weekends, he told me that he had been watching the football on Friday night on the BBC with his wife. Apparently, when the managers were interviewed, they had the following conversation:

"You know you keep asking me about that guy who works for me and what he looks like?"
"Yes?"
"Well, he looks a bit like that guy's older brother" 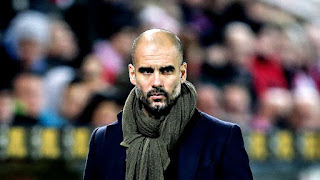 Pep Guardiola is 46 next week. He's nearly 18 months older than my older brother.

I'm not entirely sure how I feel about this.  I think, on balance, I'll probably take it as a compliment.

I seem to have one of those faces. I once ran past a guy standing at a bus stop with his girlfriend, and the three of us stared at each other as we all realised that me and the guy looked almost exactly the same.  Five minutes later, I turned around and we repeated the whole thing when I ran past them again.  A few years before that, I was eating in a restaurant in York when I realised that all of the kitchen staff were lined up behind the serving counter looking at me.  I scanned from left to right, taking them all in, until I got to the chef on the end who looked exactly like me.  He gave me a little wave.

...and before you say anything, if you think that about my dad, then you haven't met my dad.
Posted by swisslet at 20:30