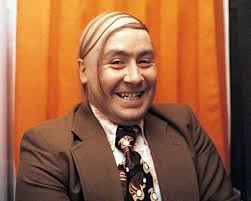 I didn’t really notice that I was losing my hair until I was already in my twenties and when my idea of a haircut was already clippers all over.

I think I might have been more upset by the whole thing if I had:
a) been younger, or
b) had been still trying to work any kind of a hairstyle.

I actually saw a middle-aged guy in Gare du Nord in Paris last month with a man-bun…. well, they’re quite the thing, aren’t they? Closer examination as he walked towards me revealed that this was a man-bun that was gathering together all the spare hair on the side of this guy’s head in an attempt to hide his bald spot.

I’m quite tall, so I tend to (literally) see through these little deceptions, but they often make me wonder about the state of someone’s mind to think that this was ever a good idea. I don’t go to my gym very much anymore, but it was a source of amusement to me to see younger men in front of the huge mirrors in the changing rooms, carefully and delicately and lovingly teasing their hair into position before they went up to the main gym for their workout. Often, I was tall enough to see that they were ultimately wasting their time and energy on what was likely to become a lost cause.  Bless them. I suppose you can't blame them for trying.

I was away from the office the other day, working in a store. Apparently, that lunchtime, they had a demonstration from a visiting company of a product that they shake onto a balding head that they then set with a blow-dryer to give you an incredibly full head of hair. The results, I’m told, were amazing and it was such a shame I wasn’t there to have this magical product demonstrated on me. I don’t get it: no matter how amazing this stuff might make you look, you’re still going bald, aren’t you? If your apparently full head of hair does magically attract a mate, then when you wake up the next morning, or when you have a shower, or when you go for a swim, or whatever, then you’re going to have some explaining to do, aren’t you?

That’s not to say that my hairloss doesn’t exert a kind of fascination for me too; I’m not completely indifferent to the rolling back of the tides. For many years, I had a little scar just clinging onto the shoreline above my right eyebrow. My hairline would retreat ever further backwards up my head, but this little scar seemed to cling on, offering me some small comfort that at least that boundary seemed secure from the ravages of time and tide. No more. That little island has been submerged in the high tide of my ever-growing forehead. I was also a little taken aback the other day to catch sight of a CCTV camera screen, showing the view from a camera located immediately above and behind me.

Only now, at the end did I understood what my wife meant as we lay in bed one evening and she gazed lovingly at me for a while before whispering in my ear, “gosh, you really are going bald aren’t you?”

Who says romance is dead?
Posted by swisslet at 21:15