one too many overreactions...

I got unexpectedly called a racist over the weekend.  By a white guy.

It was on the internet, obviously.

I'm a member of a very friendly sci-fi group on Facebook.  I didn't ask to join, but someone added me and it's been a pretty good source of reliably interesting links and friendly chatter by like-minded people... so I've stayed.

The post that caused all the fuss was a discussion on the apparent plan to remake Dirty Rotten Scoundrels with Anne Hathaway and Rebel Wilson in the lead roles.  The Michael Caine and Steve Martin film that most people know was itself a remake, but that wasn't really the issue  There was some chat about the specific casting plans - Rebel Wilson in particular seems to divide people - but mostly about the whole idea of remaking with a gender switch.  You might remember that the rebooted Ghostbusters last year faced similar criticism.

Anyway.  This was the post that triggered me to get involved in the discussion, and you can perhaps be the judge as to whether I said anything particularly provocative.....

I've kept the spelling as it was in the original, but I've modified the c*bomb that suddenly appeared.

Angry White Guy on Facebook: I have a problem with REMAKING shit for the sake of it . I have a problem with people not doing things right when they do and this modern era rehash political statement gender swap for the sake of it bollocks . Its fucking stupid lazy and dumb . Sjws radical feminists and black lives matter are the reason trump is in the white house . The next person to say white privilidge needs to be taken out and shot . That shit is fucking offensive . Fuck the supergirl tv series

Me: Because white men have always been the most overlooked and persecuted minority throughout history? I agree that we shouldn't be token about this sort of stuff, but let's not pretend that white heterosexual men have had it bad. They might have failed in the execution (I haven't seen it), but I don't see anything inherently bad about re-imagining Ghostbusters with a female cast. Apart from anything else, I applaud that four 40-something women, one of whom is black and one of whom is gay, got the opportunity to top the billing. I don't think that was only because they were female, black or gay, I think that's because they are talented. For so much of cinema history, the default casting position (and indeed, audience assumption) has been white, straight men. I also humbly suggest (and I know I started this by mentioning Mike Pence) that we keep politics out of this as much as possible.

Angry White Guy on Facebook: Ghost busters remake was the worst film of the past year by far  Stop fucking with things

Angry White Guy on Facebook: Lets not pretend white males have had it bad ? Are you fucking kidding me ?

Me: A shit film is a shit film, Angry White Guy. I won't argue with that. I didn't watch it after that disastrous trailer. It's a good idea, but if that's your ONLY idea, then you're in trouble.

Me: Angry White Guy - not being able to see that is the very definition of white privilege, I'm afraid.

Angry White Guy on Facebook: Swisslet where are you from ?

Me: I'm in middle class, white, suburban Nottingham, mate. Let's not fall out over this, yeah?

Sensible Guy intervenes: Watch Dogs 2 really brought home to me how deeply ingrained my expectation that everyone in media represents me, and when they don't, I'm confused. It brought home how frustrating it must be to not be represented in media (games, movies, tv, stage plays, dance, whatever), and I finally understood what being privileged meant in this regard. Representation does matter, and I am privileged, and it's not right....and by frustrating, I mean, utterly soul destroying in the long run.

Angry White Guy on Facebook: Im leaving this group i cant stand preachy white middle class liberals passing judgement on the world like they know any fucking thing about anyone .

Sensible Guy: Sorry to hear that - I was simply talking about myself, which I'm pretty sure is one area of knowledge I am an expert in. You've got a picture celebrating Carrie Fisher on your wall Angry White Guy, maybe worth having a read of some of her stuff, she's a classic example of why representation is key. Ghostbusters (the remake) didn't suck because of the all female cast, it sucked because it couldn't decide if it wanted to be a homage, a sequel, a reboot, or something different entirely, and it fell down the crack of confusion.

Me: Only one person passing judgement here. Sorry we can't just enjoy a shared love of Star Wars and comics and stuff.

Another Angry White Guy: Swisslet thinks it's unreasonable for anyone to state that anyone has been privileged without knowing that person. But I agree this group is about what unites us our love of Sci Fi peace to all. Even klingons

Angry White Guy on Facebook: The term white privilidge is racist . Anyone who uses it is nothing but an ignorant racist stupid [C*BOMB!] . The end

Well, that escalated quickly, didn't it?

So, apparently I'm a racist.

(It's also worth noting as a footnote to this that Angry White Guy on Facebook has not left the group up to now, but I"m seriously thinking about it because I just don't need this shit... what's wrong with people?)

I also sent the guy this picture.  I hope he liked it. 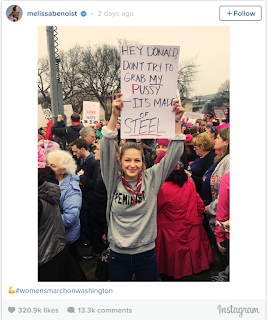 There's only one rule you need for life: don't be a dick.

Email ThisBlogThis!Share to TwitterShare to FacebookShare to Pinterest
Labels: anger management, other people