don't know much about geography...

I work with some intelligent people.  I say this now because of what follows....

One of my colleagues isn't a driver and has a somewhat tenuous grasp on geography, thinking that Leeds lies between Nottingham and London. As you can imagine, this causes much amusement in the office.

Because of this, someone shared this map that was drawn by someone in their team. 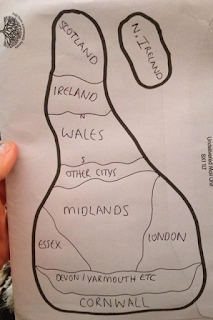 It's hard to know where to start, isn't it? What's happening to Northern Ireland up there?
"Other Citys"?
"Devon/Yarmouth etc"
What?

Perhaps stung by the insinuation that she might be *this* kind of idiot, my colleague took it upon herself to draw her own map of the UK.

This is what she came up with. 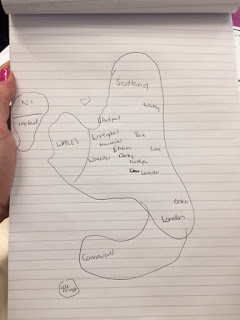 Detail on the East Midlands is quite good, but it's probably best not to dwell on much of the rest, especially if you're from Bristol, Somerset or Devon.  This splendid effort also prompted a conversation with another member of my team, also an intelligent person.

"My geography isn't very good, but I always know which direction I need to travel in."
"Really?"
"Yes, so if I want to go to London, I know that I need to go south."
"Well, that depends on where you are."
"Does it?"
"Well, if you were in Dallas, which direction would you need to travel in?"
"Oh.  East! I know that one!  Although Dallas is hotter than London, so it must be further south."
"But the South Pole is also south of London, and that's pretty cold...?"
"That's true."
"And how do you account for the fact that the sea to the east of England is called the North Sea?"
"No it isn't. That's the English Channel.  Does London have a beach? It's on the south coast, after all.
"...."

Well, no one knows everything, do they?
Posted by swisslet at 22:34