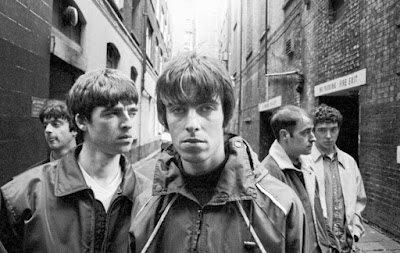 I stumbled across an interesting article today: “Why British Men Never Got Over Oasis”.

What? Well, okay…. let’s give the man a listen before we dismiss him.

“Oasis weren’t just the biggest band in the world – they encapsulated British masculinity like no one before or since. And us men were never the same again.”

Um. Speak for yourself, mate. It’s hard to know where to start with that statement, really. Oasis were many things, but original isn’t one of them; there’s pretty much nothing original about Oasis. Even the fraternal fighting was nothing new to anyone who knows anything about the Kinks. Like most guys my age, I’ve got the first three Oasis records. I quite liked them and they were undeniably a phenomenon, but they weren’t ever in my all-time top ten. I’m not even sure that they would even make a top ten of their contemporaries: I still listen to the likes of Blur and Ash and the Auteurs and I haven’t listened to an Oasis album in full for years. Hell, I haven’t listened to “Be Here Now” since 1997. I watched Wales v England at the weekend, and during the National Anthems, I marvelled at how grown men could get tearful at something as arbitrary as this; that their sense of personal identity was so bound up with their nationality. Like many people before me, I went through a phase where the music of The Smiths and the lyrics of Morrissey just seemed to speak to me in a way that no one else ever had… but Oasis definitely weren’t in that league, and why on earth would you tie your masculinity up with any band, never mind that band?

“Between 1994-97, and further still, Oasis took it up a notch. During this heady era when the British zeitgeist was riding high on all things laddism, Britpop, and football coming home – they embodied what it meant to be a man. Oasis weren’t just the sound of a cultural moment, they led the cultural moment. It was the age of bolshie, sweary, boozed-up men, and the true personification of mid-Nineties manliness, they swaggered around like they owned the place, kitted out in football shirts and indie clobber, giving it the big I am.”

Let’s be clear: Oasis have never embodied to me what it meant to be a man. I’ll go further: men who behave like this strike me as mindless gibbons. When they headlined Glastonbury in 2004, even though the tickets must have been sold months before the announcement, on the day they were playing, suddenly the bars were full of people wearing bucket hats and chucking beer around. What the hell? Radiohead and R.E.M. headlined the same year. Where the hell did those idiots go when they were playing? If Liam Gallagher is your idea masculinity perfected, then what the hell must you make of Thom Yorke and Michael Stipe?

“Listening to them now - and you'll remember most of the words - they’re like a jolt of pure nostalgia. It must have been bloody magic at Knebworth, to be one of those quarter of a million voices singing along. And I’m not the only one who wishes they’d been there. One in 20 Brits applied for tickets – a testament to Oasis’ cultural impact at the time."

I was at Knebworth, as it happens, and what I remember most clearly (apart from sitting for several hours in the middle of the night in a traffic jam around Stevenage) was 125,000 people bellowing along drunkenly, completely un-ironically to the chorus of “A Design for Life” as Manic Street Preachers played. I think most people were happier when Cast were playing, to be honest. Ocean Colour Scene played on the bill the day before, which pretty much sums it up. I was there, and it was ridiculous, but…. nah.

“Be Here Now…has stood the test of time to rank alongside Definitely Maybe and (What’s The Story) Morning Glory?”

No, it really hasn’t. It’s a horrible record, full of songs that aren’t good enough and are too long and over-produced. I bought it on the day of release and I’ve only been able to listen to it about three times. I’m certainly not about to listen to it again now. The album – five star reviews all round and a gazillion sales – didn’t mark the end of an era just because the Spice Girls came along, it marked the end of an era because it was shit.

“no band has managed to capture that sense of masculinity so perfectly since.”

Why would this even be a good thing? You only need to go to a Kasabian gig to see drunk people throwing £7 pints of beer over the front row. They’re pretty much the same people, aren’t they? (and, if anything, Kasabian are a much more inventive band than Oasis ever were). Maybe they’re a bit younger than the sad 45-year old dads who went to Heaton Park in their bucket hats to watch the Stone Roses the other year, but very much from the same lineage.

“Maybe I’m wrong. Maybe it’s just nostalgia. Maybe the flouncy dancing and self-important warbling of Chris Martin is the look and sound of modern masculinity, and I’m just too much of a curmudgeon to feel it. But it seems to me like ever since Oasis, there’s been something missing between men and rock music. “

You know what? It’s actually almost sweet reading this. This guy is clearly a bit young to remember Oasis in their Imperial phase, and it’s almost touching to read how much they moved him. He’s clearly wrong to generalise about what does and doesn’t define masculinity, but at least he’s allowed music to move him… and you can’t fault him for that, even if the band he’s chosen to be moved by is completely baffling.

sidebar: check out this list of the ten best Britpop songs in the Guardian the other day.  Luke Haines will doubtless be furious that he's been included... and the arguments about the choices are still raging in the comments section. Two Pulp songs? No Supergrass? What the hell? etc. I saw Pulp, Radiohead and Manic Street Preachers playing mid-afternoon slots at the 1994 Reading Festival (shortly before hopping across to the Melody Maker tent to watch Jeff Buckley by mistake when I was waiting to watch Gene).  We were fully a year away from the release of "A Different Class" and Britpop wasn't yet a thing.  The Manics were releasing The Holy Bible the following Monday, and I have to tell you, that although it's the least "Britpop" album you could possibly imagine, that's the record from that era that really stays with me.
Posted by swisslet at 22:41