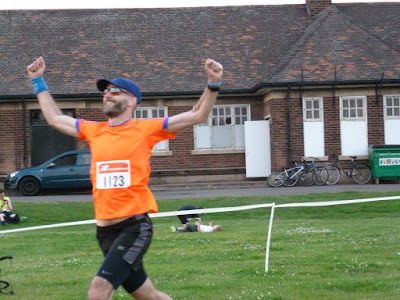 The mind is a powerful thing.  In the summer of 2005, a numb right hand was the first symptom of what was ultimately diagnosed as multiple sclerosis.  That was worrying enough, but that sensation of numbness quickly began to spread across my body, creeping down through my legs all the way to the soles of my feet (it turned out to all be caused by a lesion on the spinal cord in my neck, hence the widespread impact throughout my body).

I didn't run then anywhere near as much as I run now, but I still did the odd half marathon and liked to go out a few times a week.  Think for a moment what it's like trying to run on legs where the muscles suddenly feel numb and when you can't feel the ground beneath the soles of your feet.  It was so weird that I actually thought for a while that I might have to stop running altogether.  What would happen if I mis-stepped and fell over? The loss of sensations in your muscles that you would normally take entirely for granted made me suddenly feel very unsure of myself.

But I kept running.  It ultimately took me four years to reach a diagnosis of MS, but through that time I just kept running, slowly at first but then faster and faster. It's amazing how quickly your brain begins to adjust to a new normal, and before long, I was running further and faster than ever before.  In fact, I think the diagnosis actually made me more determined than ever not to give up: I seriously doubt that the pre-diagnosis me would ever have even considered joining a running club and taking part in a marathon.

I know this.  I also know that I'm a fairly determined, stubborn old bastard, and I like to think that, should my symptoms worsen and I am unable to continue with my running, I will find something else to keep myself active.

But I still find myself worrying about the way my legs currently feel like they belong to someone else, possibly to someone who has been dead for several months? There's a new stiffness in my legs now that sees me staggering around like an old man first thing in the morning and after I've been sat down for a while.  I can feel it when I'm running, and I can feel myself becoming more cautious and slowing myself down.  Are these new symptoms? Is this temporary, or will I feel like this forever now? Perhaps this is the beginning of the end? Perhaps I should start to be more careful?

My rational brain tells me that I should keep going: my brain will adjust to a new normal soon enough, just as it did before.  It might take a while, and perhaps I'll have to slow down for a bit and maybe I won't ever manage to be as fast as I'd like to be.... but I can surely keep running.  I know all this.... but I'm still afraid; I'm afraid of the symptoms I feel and of what they might mean.

But you know what? Whilst all this has been going on in my head, I also went and joined that Athletics Club where I've been doing track interval training on Thursday nights.  They're a really friendly bunch and have made me feel very welcome over the last few weeks... I doubt myself every week, and I spend most Thursdays in a state of mild dread about the evening training session ahead because I can't quite shake off the feeling that I don't belong and that I'm nowhere near a good enough runner to be even thinking about training on the same track as these thoroughbreds.  I know rationally that no one cares about how fast I run and that they're simply delighted to have me on board and want me to be as good a runner as I can be... and I enjoy the sessions (once we're finished, anyway - it hurts!) All the same, the demons in my head keep whispering these negative thoughts, doubling down with the way my legs feel and trying to convince me to take the easy way out and to give up.

I felt that fear and I decided to join anyway. I feel the fear before every track session, but I go anyway.  Not only am I going to keep running, but I'm going to keep trying to push myself to be as good a runner as my body and - perhaps more importantly - my mind will let me be.

[partially inspired by this article on running demons]
Posted by swisslet at 20:11

Email ThisBlogThis!Share to TwitterShare to FacebookShare to Pinterest
Labels: crazy in the coconut, exercise as therapy, more important than that, possibly excessive stoicism, we do not talk about running club, WTs