a fortress, steep and mighty...

When I first started work, I thought that I was going to be managing director; I thought that it was only a matter of time... ten years at the outside.  I also thought that I liked working autonomously and that I didn't really enjoy being part of a team where it meant I would be dependent upon the work of other people in order to succeed.  For a long time, I worked in a role where I was basically responsible for my own output, and that suited me just fine.

As I grew older, I realised that I didn't actually want to be managing director...not that it was likely to happen. I also realised that, far from being an island, the main reason I went to work at all was because of the people. I'm an introvert by nature in the sense that I derive energy from within myself and find prolonged contact with other people draining, so this realisation sort of took me by surprise.

Not coincidentally, I've also been a lot happier at work since I've had a team to manage.  You can blag your way through a lot of things at work, but people management should not be one of those things; it's the one thing that you shouldn't shortcut and I spend a lot of time trying to make sure that I'm doing the right things by my team.  I've won awards at work, but I think the single thing that makes me proudest is that my team scored me 100% in all the line manager questions in our last company-wide colleague temperature check survey.

Today I received concrete proof: they gave me this as a birthday present: 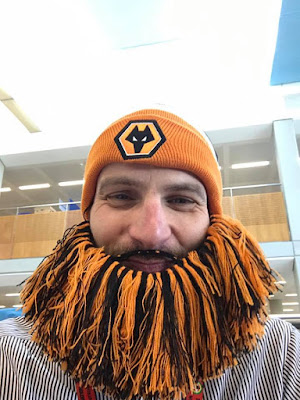 I can only imagine that this little beauty must be a bestseller amongst Wolves fans and that literally hundreds can be seen on the home fans every match at Molineux. You'll notice that, I might just turned another year older, but apparently I'm not too old to pull this little beauty out if it's (Spider-Man) wrapping paper and put it straight on in the middle of the open plan office...

I'd wear it skiing, but I already wear a helmet when I'm skiing so it wouldn't really work. 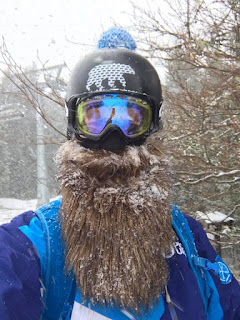 They also gave me a luminously lime green Wolves 3rd strip and some beer.

I'm telling you, those guys are the best team anyone could possibly hope for.  I'm a lucky boss.
Posted by swisslet at 21:26

Email ThisBlogThis!Share to TwitterShare to FacebookShare to Pinterest
Labels: my brilliant career, other people, work