We had a royal visit at work today.  For those of us trying to get some work done, it was a massive pain in the arse, to be honest.  There were Special Branch policemen all over the place and various parts of the building were completely off-limits for several hours.  Not to mention, of course, that lots of people in the building took the opportunity of the visit and the speeches by the various dignitaries to waste as much time as possible. There's a certain kind of person, I find, who derives an enormous amount of self-importance from the simple proximity to a VIP, even if they're only giving them coffee and holding their coat.  There were lots of those people around too.  We also had a memo sent round explaining what the protocol was if we should happen to meet the royal visitor.  Apparently it's Ma'am to rhyme with "ham" and not Ma'am to rhyme with "palm", if you were wondering.

I was particularly inconvenienced because the visit coincided exactly with the time slot given to me for the delivery of my Avonex.  Every month, I have the prescription for my weekly injections delivered to me in the office.  Usually, this works pretty smoothly and I have a good relationship with reception and they're happy to make an exception their usual rules about signing for packages and take my meds in until I can get down to pick them up.  They also know the drill about not accepting a new sharps bin (they try and give me a new one every month, when actually one will last me a couple of years) and they also pretty good about not taking the vast outer packaging with chill packs and at making sure the drugs get into the fridge too.

The royal visit kiboshed all this quite nicely, and I had to fight my way through a massive crowd of gawkers trying to catch sight of the royal party parking up and walking into the building to get across to a side exit to meet up with the courier (who was struggling to be let onto the site by security at the gates) and to sign for me drugs.

Sadly, the courier was super-helpful and persistent, so this whole process didn't take anywhere near long enough to stop me catching the speeches on my way back across the building to my desk.

I'm not a royalist, as you can probably tell.  I will however concede that the purpose of the visit was a good one: my company has helped to put together some wash bags that are given to women who have been raped and have been through the further indignity of a medical examination by police doctors looking for genetic evidence... it's an initiative that is patronised by this particular royal, hence her presence.  For some reason, I was taken aback by quite how posh she sounded when she spoke.  In fact, she had a surprisingly deep voice and sounded a bit like Tim Nice-But-Dim with a heavy cold. 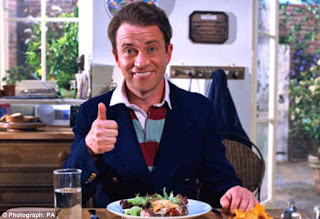 Later, as I was in the changing rooms getting ready for the cycle home, we cyclists naturally chatted over the events of the day:

"Well that was fun, wasn't it?"
"Splendid, although they could have sent a better royal"
"What, you mean like Prince Philip?"
"Well, you have to admit, he would have been more entertaining because you couldn't ever really be sure what would come out of his mouth"
"Whilst representing a charity for rape victims?  What's the worst thing that could happen?"
"Hmm. Maybe that's why they didn't send him"
"Well, it could have been worse. This one was at least a little further up the pecking order than Sophie Wessex"
"Joey Essex...?"

Joey Essex?  Now you're talking.  His speech would probably have been more memorable than the one the Duchess of Cornwall managed (which was fine and vastly more comprehensible than the utterly impenetrable speech of one of the other VIPs).

The building also smelt of wet paint all day.  It's easy to believe that most of the royal family think that this is how the whole world smells.