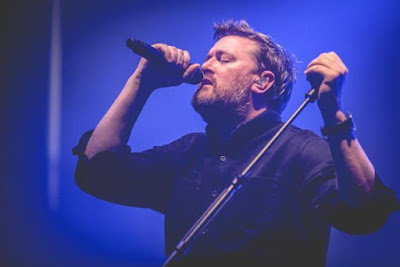 You have to wonder why some people bother going to gigs at all.

I realise that not everyone wants to stand watching a band in rapt silence as they perform, applauding politely at the end of each song. Some people like to sing along; some like to air guitar; others like to gaze lovingly into their partners eyes…. They might be your favourite act in the whole world or you might just be there because a mate had a spare ticket and you reckoned you had nothing better to do. You get all sorts of people at a gig with all sorts of different levels of interest in the bands performing. And yes: some people will have a bit of a chat with their mates or mess about with their phones. It’s all good.

…there are some basic rules though, aren’t there? I’m a firm believer that the only thing you really need to remember as you bumble your way through life is to try not to be too much of a dick. If we all lived with that simple guideline in mind, then I reckon the world would be a much nicer place. As far as a gig goes, this means that you might like to give a moment’s thought to the people around you and to think that they might actually quite like to enjoy watching the band play and not to listen to you chatting to your mates, raising your voice so that they can hear you when the band start playing; this means that perhaps you shouldn’t stand with your phone up, flash on, trying to film you and your mates sending a message to a friend… it’s not hard, is it?

Clearly, because we’re English, nobody does the sensible thing of asking them nicely to shut up. Instead, we all just stood there glaring at them. As the show wore on, a space started to form around them as people just started to move away from them. But why should I move? I have a right to be here and to try and enjoy the band, don’t I? At one point, someone clearly told a steward about them, but after watching them for a song – during which they were relatively well behaved, naturally – she quickly disappeared.

They’d clearly been drinking, although they weren’t paralytic by any stretch of the imagination, they were just utterly oblivious to anyone else around them. I think they would have actually been pretty annoying if you happened to be in the same pub as them, never mind a gig.

I just don’t get it. Why would you pay £30 a head to attend a concert when the music is clearly an inconvenience to your night out with your mates?

Up until the moment these bozos caught my attention when the house lights went down and the band came onstage, I’d been quite enjoying my evening: Elbow are a really good band that I have seen many times before, and de Montfort Hall is a pretty nice venue… infinitely better than the Arena the band played the last time they were in Nottingham. In fact, the last time I was at this venue, it was to watch the same band perform a sold-out gig that took place just after their Mercury Prize win in 2008 and turned into a huge celebration. I felt at the time that this might be my last chance to see them before their audience began to change as a result of the success. Perhaps this was a bit snobby of me, but I certainly enjoyed walking into the venue last night and having the all-too-rare sensation of being one of the younger members of the audience. I spent a fair bit of time marvelling at quite how many people were wearing primary coloured anoraks. There were lots of beards too, not that there’s anything wrong with that (and I was wearing my tan brogues, so far be it from me to criticise).

I tried not to let the idiots ruin my night, but about three-quarters of the way through their set, I realised that I should really just move. So I did. Because I’m tall, I made my way from where I was standing to the very back of the hall. Just as I was settling down to enjoy the rest of the show, I felt a tap on my shoulder. I looked behind me and saw a late middle-aged couple slouching on the wall behind me. Not directly behind me, but to one side. The woman glared at me and gestured angrily, the guy just said “We’ve been here all show”. I stared at them. I’m sensitive to standing in people’s way, but equally, if you set yourself up right at the back, leaning on a wall, don’t be surprised if your view is slightly obscured. Feel fucking free to let me stand behind you or perhaps think about buying a ticket for the seated area next time.

I moved, obviously. I understand, but equally I was really angry at the entitlement radiating of these people. You can ask me to move, but you don’t have to be a dick about it. The gig was dead for me. Even the sight of the same guy doing the most amazingly awkward, stiff dad dancing and out-of-time clapping with his arse sticking out to “One Day Like This” didn’t cheer me up very much.

Were Elbow any good? They sounded all right. The new stuff sounds good, although I think they paced their set very badly, and they played a range of other stuff from across their whole career. Lovely Guy was lovely, naturally.  I’ve been lucky enough to see them many times, often at Rock City in the week before they release a new album, and also at Glastonbury…which is in many ways their natural home. I’ve seen them better, but they were fine. Let’s leave it at that, eh? It wasn’t the band’s fault that gig twats ruined my night, but ruin it they did.

Luckily, we had a great sing-song in the car on the way home to my choir backing tracks, which cheered me up immeasurably.

Setlist:
Gentle Storm
The Bones of You
Fly Boy Blue / Lunette
All Disco
Mirrorball
New York Morning
Scattered Black and Whites
Little Fictions
Kindling
My Sad Captains
The Birds
Magnificent (She Says)
One Day Like This
Encore:
Lippy Kids
Grounds for Divorce
Posted by swisslet at 19:20