in the desert you can remember your name... 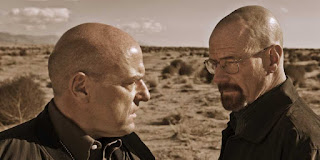 My wife left home on Friday to work the weekend before her big conference this week.  Since she's been away, as well as work as normal on Friday, I've guided my friend Terry around parkrun and then took him to catch up with friends in the cafe for a bacon cob and a cup of tear. I've attended a three hour rehearsal for this week's end of season concert with Choir and had a quick pint with a friend before coming home to fix a(nother) puncture on my bike - that's three in four days now.  I've also completed a few domestic errands, topped up my wife's supply of artisanal fruit beer (she's very particular) and done the weekly shop.  I've even been out running twice and managed not to fall over.

What's probably not normal is that I'm not going to watch the remaining three episodes in the season before going to bed tonight.  Given the way the episode I've just watched finished, that's pretty remarkable.

You've seen this already, right?  You know this is good and that I should have watched it years ago.... well, better late than never.
Posted by swisslet at 22:56