you can find me in the club... 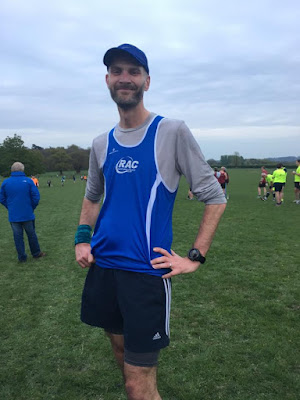 Yesterday, I made my debut for an actual athletics club; I wore my club colours and I took part in the first summer league race of the season… a 5.2 mile race down back roads, paths and fields around a lovely stately home at Hexgreave Hall. That sounds much more hardcore than it actually was: although the person who won crossed the line in something under twenty-five minutes and you needed to be a member of a running club to take part, the person who finished last probably took something in excess of sixty minutes. The guys and girls in my club are generally all whippets who leave me in their dust, so I was initially a bit reluctant to put myself in a position where I might be exposed as a laggard.. but then it was pointed out to me that a blind lady from our parkrun would be taking part representing a club called the Woodthorpe Huffers and Puffers, so I felt a little bit like I’d run out of excuses and put my name down.

I completed the course in a time of a little over 41 minutes. It’s quite mixed terrain, with some quite bumpy bits on grass that compelled me to slow down a bit rather than risk falling over (which I nearly did a couple of times), but on the whole I was quite pleased. In position 280, I was comfortably the last male member of my team to finish, but was probably barely halfway down the whole field. More importantly, the whole atmosphere was lovely and supportive and my team made me feel welcome and valued. And of course, because they almost all finished before me, they all clapped and cheered me in, which was nice. 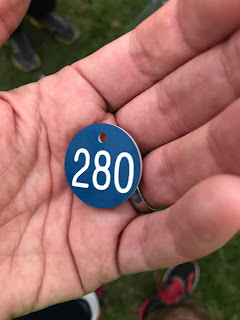 As I mentioned the other day, I’ve been making excuses about my running because I feel like I should explain why I’m not going faster. I resisted the urge yesterday and I even cautiously allowed myself to be slightly pleased. I ran the Notts 5 mile race over the last two years. This is a flat, fast course on the roads by the river Trent, not the slightly longer, mixed terrain route with a few hills at Hexgreave yesterday. In 2016, I ran a fairly comfortable 43 minutes and in 2015, I ran a much harder feeling 38 minutes that is likely my PB for the distance. I crossed the line yesterday feeling that I had a little more to give with a time of around 41 minutes and a pace of about 8:04 minutes per mile. I’ve not been that fast for a while, and I don’t think that’s a million miles away from what I would consider to be my fastest. Frankly, anything approaching an average pace of less than 8 minutes/mile is as fast as I’ve ever been over any distance.

Maybe the time has come to stop being so hard on myself and to just enjoy myself a bit more. I’m not doing so bad, really.
Posted by swisslet at 22:14

Email ThisBlogThis!Share to TwitterShare to FacebookShare to Pinterest
Labels: exercise as therapy, more important than that, we do not talk about running club, WTs